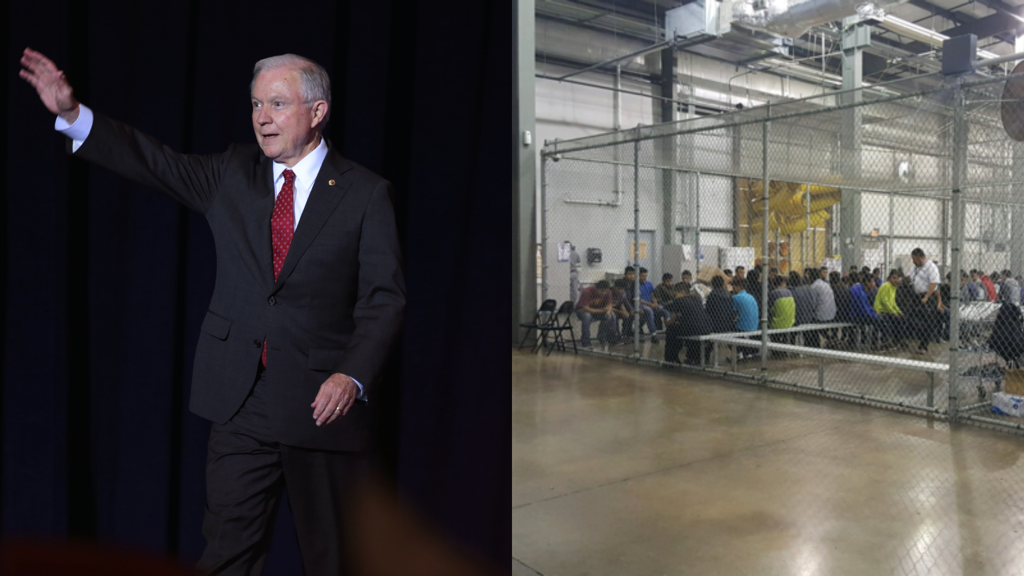 Former attorney general Jeff Sessions, left, was one of the architects of the Trump administration’s immigration policy that led to separations of children from their families. An immigrant detention facility in McAllen, Texas. Photo credits: Gage Skidmore/Flickr, U.S. Customs and Border Patrol

The Donald Trump presidential administration knowingly separated children from their families at the U.S./Mexico border with a 2018 order, details of a new report reveal. A draft of the yet-to-be-released report from Department of Justice inspector general Michael Horowitz was uncovered by The New York Times. It includes notes from U.S. attorneys who say that top officials at the White House were aware that their policy would take children away from their families.

“We need to take away children,” said Jeff Sessions, the U.S. attorney general at the time. He went on to say that the policy would not grant amnesty to immigrants with children.

The deputy attorney general at the time, Rod Rosenstein, told prosecutors in a separate call that the age of the children did not matter. The government should prosecute cases even if the children are infants, Rosenstein told them.

Sessions and Rosenstein have since distanced themselves from these policies, saying they were following orders from the White House.

The “Zero-tolerance” policy led to more than 3,000 children being separated from their parents at the border. It has continued into 2020. The draft report says Justice Department officials were also a driving force in enforcing the policy and that Trump administration officials believed family separations would deter illegal immigration.

The report also details a pilot program for family separations in El Paso that took place in 2017, before the policy was announced publicly.

The family separations policy has been only one of many criticisms against the administration in how it has handled undocumented immigrant cases. In recent months, it has been taken to task for placing children in hotels, for sexual assaults at detention centers and for conditions at detention centers that have led to coronavirus cases. Recently, one detention center was accused of performing unnecessary medical procedures on detainees, such as hysterectomies.