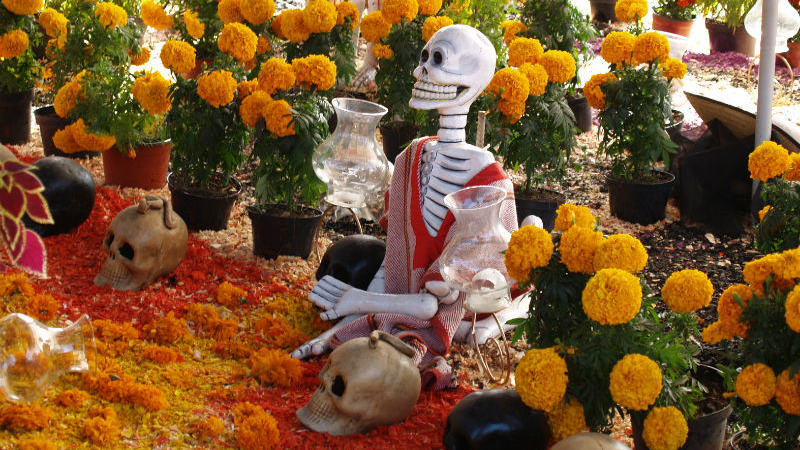 Once you’ve had a whiff of the Flor de Muertos, you won’t forget it. That’s because the cempasúchil, or ‘flower of the dead,’ has a unique pungent scent. By mid-October, this flower with the color of a deep sunset, is part of many Día de Muertos celebrations.

But the Cempasúchil (which means “twenty petals” in the Aztec language Náhuatl) has a romantic origin legend.

During Aztec times, two kids named Xóchitl (which means flower) and Huitzilin (hummingbird) grew up together and eventually fell in love.

They would climb to the top of a mountain and leave flower offerings for their sun-god Tonatiuh.

When war came, Huitzilin had to join other warriors on the field to fight, and he was tragically killed.

Soon, news of his death reached Xóchitl, who was so devastated that she ran to their mountain and begged Tonatiuh to reunite them.

Toantiuh, moved by her emotion, beamed his rays towards her and transformed her into the Cempasúchil flower. He then reincarnated her lover into a hummingbird.

It is said that when Huitzilin, as a hummingbird, approached Xóchitl in the form of a flower, she opened into twenty petals and releases a powerful scent.

Since then, the Aztecs have used the Cempasúchil during Día de Muertos celebrations, and they say that hummingbirds are always nearby.