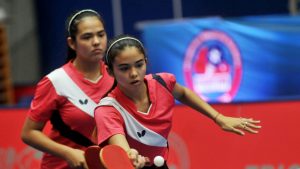 Adriana and Melanie Diaz are a table tennis dream team. The Puerto Rican sisters brought home the gold medal after their doubles victory in the Pan American Games of tenis de mesa in Lima, Peru 🥇

Hailed as the ‘Serena and Venus Williams’ of table tennis, the 18-year-old Adriana and 23-year-old Melanie duo come from a family of table tennis fans. Their parents, Bladimir and Marangely, and two other sisters played competitively in the past. Adriana made history as the first-ever Puerto Rican female table tennis player to qualify for the Olympic games, and she was named one of the world’s top 50 players. She’s set to compete at the Tokyo Olympics in 2020. Meanwhile, Melanie made it into the tournament semifinals

Adriana’s profile has risen since her table tennis win, and there’s hope that she could popularize the sport in the United States. When she was young, she tried playing with dolls but realized she was more of a “sporty girl” at heart. Her family helped table tennis gain popularity in Puerto Rico, and that ignited her love for the sport. Adriana credits her success to sister Melanie, who taught her moves and mental strategies, and also her dad’s encouragement.

Daddy Yankee was so impressed with the sisters, that he helped sponsor them so they could compete in Switzerland and Austria last fall. The young women said they look up to the Williams sisters, but we think they may surpass them in their own right! 🔥🙌🏾