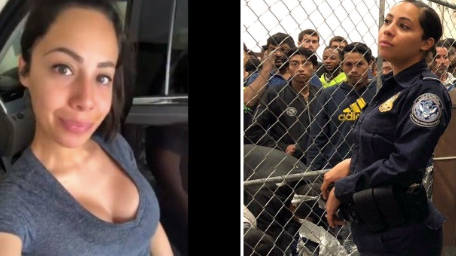 26-year-old Latina Kiara Cervantes is getting more attention than she bargained for, and for all the wrong reasons. The U.S. Customs and Border Protection officer, nicknamed “ICE Bae” on social media, appeared in a viral photo that showed her providing security for Vice President Mike Pence during a visit to a Texas detention facility at the border.

There are many Border Patrol agents who are Latinx, she’s far from being the only one. But Kiara’s eager acceptance of social media fame for her role shows her siding with the current administration’s hateful and cruel anti-immigrant rhetoric, even when it targets her own gente. She dismissed critics and defended her actions by saying it was an “honor” and that she takes “a lot of pride” in her job. Her critics reminded her Nazis used the same excuses during World War II.

Tell AOC we breaking up and tell ICE to come get me! 😂 pic.twitter.com/YO5IZqnBvl

Many of her social media fans mocked the inhumane conditions migrants are subjected to in border facilities, while they complimented and even sexualized Kiara, saying they’d like to be “detained” by her. As if being ripped away from one’s family, going hungry and forced to inhumane conditions is something to joke about.

Kiara created a Twitter profile, where she embraced her “Ice Bae” label. Kiara is a privileged Latina who is immune to the injustices taking place right in front of her, who’s seeking instant fame for the wrong reasons.