Justice served for Texas rape victims thanks to this Latina

Southern state governments may have unleashed a war on women’s rights through a series of anti-abortion bills this session, at least this Latina lawmaker in Dallas, Texas, isn’t keeping her arms crossed.

Democratic House Representative Victoria Neave wrote the Lavinia Masters Act to tackle the rape kit backlog in Texas so that women don’t have to wait for justice to be served.

Victoria, who just completed her second session at the Texas House, has already gained a reputation as a women’s rights warrior. The Latina politician wrote this bill, which Governor Greg Abbott signed into law, to honor sexual assault survivor Lavinia Masters. 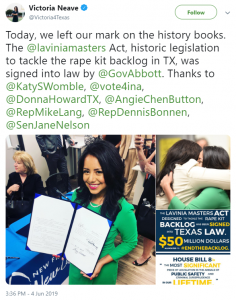 Lavinia’s rape kit sat on a shelf for over 20 years and by the time the DNA was matched to her attacker, the statute of limitations had passed. This meant Lavinia couldn’t press charges even though the criminal had raped other women. Through her law, Victoria is ensuring this never happens to other women in Texas.

Victoria says rape is one of the worst things that can happen to a woman, and fiercely pushed this bill forward in Congress in a state where Democrats and Republicans rarely want to work together. Luckily, both sides understood the importance of this law and now officials can find rapists easier and faster.

This is what a determined Latina can do when she sets her mind to it.