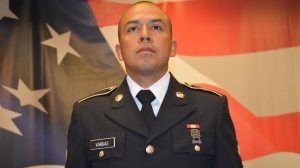 Once undocumented, this attorney and activist is a national hero

The 9/11 terrorist attacks shook Cesar Vargas to his core. He longed to fight for freedom alongside his friends in the military  🇺🇸 but his immigration status impeded him.

It’s a reality that ate at him long before 2001. As a teenager he wanted to enlist in the Army Reserve, but his high school counselor told him he couldn’t because he was “illegal”.

Cesar was devastated. All he wanted to do was help protect the U.S.

At 35 years old, that calling to serve his country turned into reality. It was a culmination of a near 20-year journey from undocumented immigrant, to an authorized and standout attorney and activist.

He fought the legal system for three years before the bar approved his application, where he served as New York’s first openly undocumented lawyer.

He’s proud of his service, but knows that the country he’s fought so hard to defend still leaves many in the shadows. Including his own family. His mom Teresa Galindo was heartbroken she and her younger DACA son couldn’t attend Cesar’s boot camp graduation because they lacked “proper documentation.”

She felt discriminated against, she said. Cesar viewed his graduation as a tribute to his mom’s determination. Cesar, you’re our héroe in every sense of the word 🙌 ¡Gracias por tu servicio!