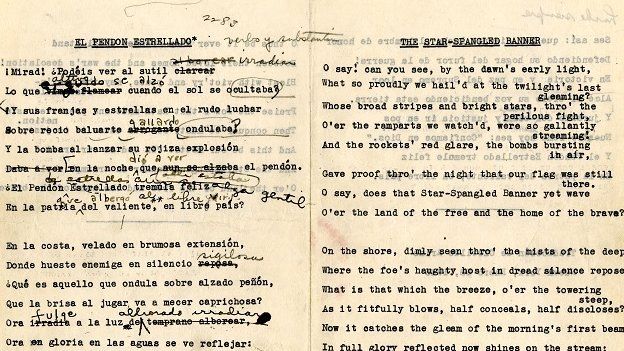 The Spanish ‘Star-Spangled Banner’ has an interesting history

Many of us were taught the history of the ‘Star-Spangled Banner’ in school, and how the song adapted from Francis Scott Key’s poem during the War of 1812 eventually became the U.S. National Anthem. But few know the history of the song’s Spanish adaptation…

During World War II, President Roosevelt’s administration wanted a Spanish language National Anthem in an effort to gain allies from Latin America. They put out a call for lyrics, and…

Latinos aren’t the only group ignored by the anthem. The English version is protested for its lesser-known verse referencing slavery.

To give Clotilde’s lyrics the attention they deserve, and recognize so many Latinos “disproportionately affected and exposed to COVID-19,” the We Are All Human Foundation asked Puerto Rican singer and La Voz winner Jeidimar Rijos to record “El Pendón Estrellado.”