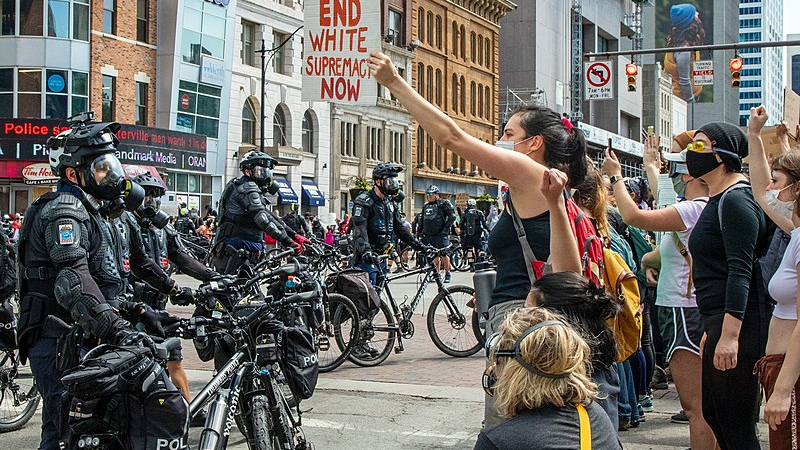 How to support the 10,000 arrested across the country

Tens of thousands of people in every state in the U.S. have taken to the street to demand change and protest the killing of George Floyd and systemic racism that affects Black and Brown communities. Since uprisings started on May 25, more than 10,000 peaceful protesters have been arrested, leaving their families and friends seeking support to release them.

On May 25, Derek Chauvin, a white police officer kneeled on George Floyd’s neck for almost nine minutes and the video circulated internationally, causing outrage and becoming the catalyst for countless ongoing protests. Across the country, thousands have been arrested, and it’s not only those looting or destroying property. In Los Angeles and New York City, the majority arrested are non-violent protesters, many of which are Black and Latino citizens as well as undocumented people who now face potential deportation. Essential workers who are out late working after the city’s curfews have also been arrested.

The police response to the actions has demonstrated a new wave of government overreach and police repression in the U.S. “Rather than allowing people to protest peacefully, the NYPD are violently arresting them and holding them for hours,” according to executive director of New York County Defender Services, Stan Germán. Some, like Khelon Robinson-Fraser in Atlanta, have reported being threatened that police can hold protestors for “as long as [they] want” if protesters ask too many questions.

Police make an arrest outside of Trump Tower on May 30, 2020 / Source: Getty Images

Asides from arrests, protesters are risking their health by congregating in the midst of the coronavirus pandemic that has seen recent spikes in cases. By placing the thousands who are arrested in cramped spaces, police actions are heightening risks.

Undocumented people or people with prior records and history with law enforcement also have dire consequences if arrested, and many immigration activists are warning them to consider their rights and risks before joining protests. Representative, Jesús “Chuy” García, D-III, says many undocumented people are unsure about joining protests because of the repercussions. “They have to look out for the entire household. They don’t want to bring trouble home,” he said.

Friends and families of these 10,000 or more people arrested may be worried about their loved ones. Since there are so many arrests happening in many places, each with different processes, it can be hard to know where your loved one is being detained. Many have seen or know their loved one is arrested, but some are unsure. Undocumented activist and “Dreamer”, Máxima Guerrero was arrested during protests in Phoenix, and in order to release her, fellow activists and community members first confirmed her arrest then flooded the local jail and sheriff with calls in order to release her.

Those arrested have rights, and there are ways to access legal services and funds for those detained, advocates say. The National Lawyers Guild provides a hotline that those arrested can call for legal representation and The National Bail Fund Network has funds to release protesters across the country. Those looking to access funds, should call or email the group in their city once they know where the arrested person is being held.

As people continue putting their health and lives at risk because they believe in the importance of a democratic society, one way to support freedom of expression is by supporting peaceful protesters at this moment.

Other ways you can support those arrested:

Donate to bail funds in local communities — This list includes bail funds, to support people who don’t have funds and were detained. The National Bail Fund Network is a project of organizers, advocates, and legal providers that seek to reduce incarceration.

Donate to The National Lawyers Guild — One of the leading groups of legal experts who help people who are wrongly detained. Donations support legal services for political activists.

Call representatives and demand protesters are freed — Find your local representative’s phone number or email and call to demand change and show solidarity. One of the demands you can state is “releasing prisoners so that we live in a society without repression of speech.”