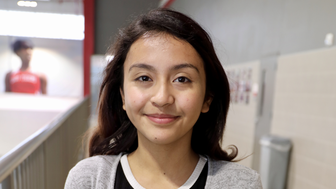 This ambitious Latinita is on her way to Mars

Texas high school junior Perla Bautista has her gaze set on the stars, and NASA has their sights set on her. She was chosen for a coveted spot at NASA’s High School Aerospace Scholars (HAS) program. Only a handful of Texas students are chosen each year.

Perla has dreams of being a jet pilot, engineer and rocket builder, but she wasn’t always interested in these fields. She changed her mind when she realized that she could help people through science.

As a HAS scholar, Perla will learn about space exploration, Earth science, technology and aeronautics, as well as chat with NASA engineers and scientists.

She hopes to be invited to a six-day residential summer experience at NASA’s Johnson Space Center in Houston, where she’ll work with NASA experts on designing a mission to Mars.

Because the sciences are male dominated fields, “I knew it would be hard to get in,” Perla said. “But I was excited to learn that I had been accepted.”

Congratulations Perla, maybe we’ll see you orbiting space in the near future!