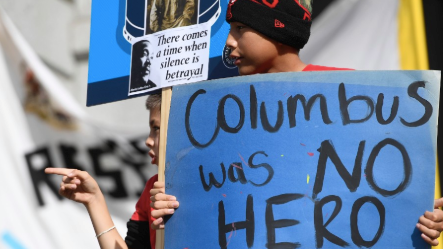 Columbus Day is controversial. We should eliminate it for good

In the United States, the 2nd Monday in October is Columbus Day. The first documented observance of Columbus Day was in 1792, on the 300th anniversary of Columbus’s arrival to the Western Hemisphere. This holiday is meant to honor the “discovery of America.”

Let’s get it straight, though, Columbus didn’t “discover” anything.

When Columbus arrived to this land there were thriving Native American communities already here.

What we should be remembering Columbus for is his colonial takeover of what is now the United States.

Columbus and his soldiers’ violent and opressive tactics included enslaving, raping, and torturing natives, and caused the death of millions of Native people.

These activists were seeking public recognition that Native people are the first inhabitants of the Americas.

Indigenous People’s Day shifts what has traditionally been a celebration of colonialism into a day of remembrance, and luckily there’s a growing number of cities and states that are adopting the new holiday.

Replacing Columbus Day is the least we as a country can do to honor the victims of colonial genocide and oppression.

On Monday the 14th, we’ll be celebrating indigenous resistance.