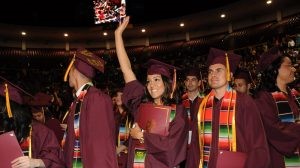 9 colleges that want Latinxs to succeed

When Jodi González and her son Michael of Central Texas started considering colleges, they were overwhelmed with the options. Factors like tuition, diversity and geography varied. That’s why they were relieved when Austin Community College reached out to them personally.

Michael graduated from a majority Latinx high school and it was important to him, as for many Latinxs, to choose a school with classmates and professors who looked like him. ACC’s recruitment officers understand that a sense of confidence and identity is important to success, and they made it a point to make Michael comfortable.

Jodi says her son will get more out of his time at ACC than he would in a larger and more traditional campus. Experts agree, since ACC is one of nine higher education institutions awarded the new ‘Seal of Excelencia’ for success with Latinx students. The award recognizes an institution’s commitment and ability to successfully serve Latinx students and close the education gap.

In addition to Austin Community College, the other eight institutions 🎓 include:

Deborah Santiago, the CEO and co-founder of the Washington nonprofit Excelencia in Education,  charged with selecting these colleges, says they are meant to serve as models for other institutions of higher learning to follow.

When higher education systems embrace our gente’s needs, it’s a win-win for our country’s future!