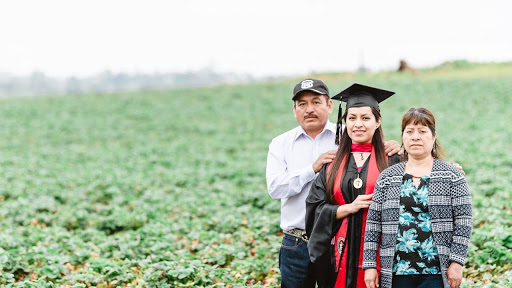 Para ellos: Why Erica Alfaro owes her master’s degree to mami and papi

From the beginning, the odds were stacked against 29-year-old Erica Alfaro, who graduated from Cal State San Marcos with a master’s degree. She became a mom at 16, dropped out of high school and was trapped in an abusive relationship. But with the support of her parents, she reached her dreams.

Born in Tijuana, Mexico, her parents moved the family to Oceanside, Calif., when Erica was 13 years old. Although her parents believed education was important, they weren’t able to go to school themselves and got jobs as farmworkers. Alfaro seemed destined to repeat the cycle. Yet Erica was determined to break it.

Her son Luis inspired her to finish school, first through homeschooling. Then, she enrolled at junior college before transferring to Cal State San Marcos. There, the obstacles continued. Her son was diagnosed with cerebral palsy causing Erica unexpected but understandable depression.

Still, Erica would keep fighting. Among the difficulties she remembered the day her parents took her to the tomato fields to remind her that the only way to break the cycle was through a good education. No matter how hard it was, Alfaro knew she wanted to be part of the 2% of teen moms who graduate college by age 30.

On graduation day, she thanked her parents for their sacrifices in a viral photo showing the trio in a field of strawberries. It resonated with us, and made us collectively thankful for our papis and mamis giving us a better life.