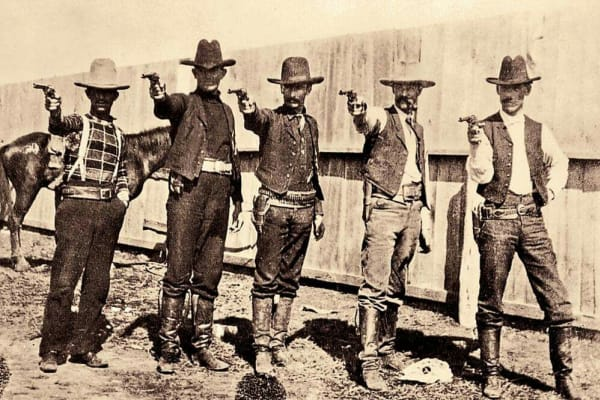 The bloody history of anti-Mexican and anti-migrant violence runs deep throughout the Southwest.

From the “Hour of Blood” to modern-day violence at the border, here is a look at the dark legacy of anti-Latino abuse, torture and lynchings in Texas.

1896 — Aureliano Castellán was executed for looking at a white woman. His body was found severely burned, with eight bullet wounds. His attackers had poured coal oil on him, and burned his body before dumping it into the river.

The Hour of Blood begins

1910 — Antonio Rodriguez was jailed, accused of murdering a rancher. An angry mob swarmed the jailhouse, torturing 20-year-old Rodriguez before burning him alive. This started a bloody decade known as La Matanza, “the Massacre” or Hora de Sangre, “Hour of Blood.”

An act of self defense

1911 — Gabriel Gomez, age 14, was approached by a mob that accused him of a crime, and encircled him before he could get away. In an act of self defense, he stabbed one of the men, who later died. Within three hours, Gabriel was jailed, abducted, dragged by chain and hanged.

1915 — This 1915 postcard, called “Dead Mexican Bandits,” shows three Texas Rangers posing with the bodies of four Tejanos, apparently killed at random for the crime of theft.

1918 — In the Porvenir Massacre, Texas Rangers surrounded the village of Porvenir around 2 a.m. and forced the residents out of their homes. They then binded 15 male residents together and began firing at them until they ran out of bullets.

‘Juan Crow’ and the border watch

White supremacists at the border

1977 — The Ku Klux Klan announces an armed border patrol from Texas to California to combat “the illegal alien problem.” A military officer recalled that “practically every other member” of El Paso’s National Guard “was in the Klan.”

1998 – 2019 — More than 3,200 migrants died crossing Texas’s southern border during this period, making south Texas the deadliest place for migrants in the U.S. Attempts to avoid a Border Patrol station have resulted in getting lost, dehydration, heat exhaustion, hypothermia and ultimately death.

2021 — A migrant was found dead in an apparent lynching in Brooks County in south Texas. The clothes of the Mexican male were found nearby. His feet were missing.

How to help: Border Angels is just one organization doing work on the ground to help reduce the number of fatalities along the US-Mexico border. The nonprofit engages communities on both sides of the border with education and awareness programs, including guided trips to drop water bottles along migrant crossing routes. The group is always looking for donations, and social and human rights advocates to volunteer.