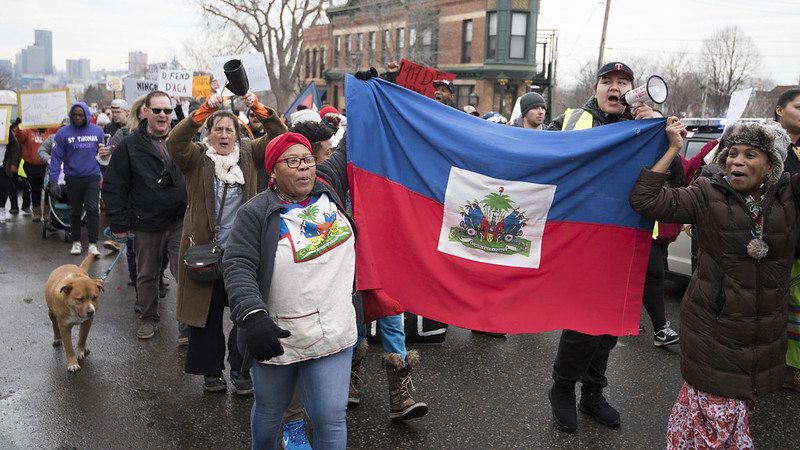 ‘They turned a blind eye.’ Advocates call for protections to save Haitian lives

The recent assassination of Haitian President Jovenel Moïse has underlined the urgent need  for aid and the protection of Haitian lives, human rights advocates say. As thousands of Haitian refugees are stuck at the U.S. southern border, groups are now calling for President Joe Biden to act on securing Temporary Protection Status (TPS), and to halt deportations to Haiti.

In the months leading up to the assassination, tensions in Haiti were on the rise, as many Haitians believed Moïse was undermining Haitian democracy. In addition, Moïse was reportedly involved in the dilapidation of the PetroCaribe funds, the country’s greatest corruption scandal in recent times.

The people of Haiti organized a general strike in response to the president’s refusal to step down from his position at the end of his term in February of this year.

Following the strike, protesters of the Moïse administration were reportedly kidnapped and arrested. Haitians have been fleeing the country due to the dangers the political crisis has created.

Haitian political activist Kinsley Jean has been following the events of Haiti closely, and feels that more could have been done to help Haitians in the years leading up to the assassination.

“Kidnappings, rapes, assassination and massacres became commonplace in Haiti,” Jean told Pulso. “As the population asked desperately for help from the government and from the international community, they both turned a blind eye to the Haitian people.”

While the Biden administration redesignated TPS for Haitians on May 22 for an 18-month period, eligible Haitians still await the required immediate publication in the Federal Register. Such a move would open up TPS applications for Haitian refugees.

In a collective effort, more than 130 organizations signed off on a letter to Biden urging the U.S. to take life-saving action regarding TPS for Haitian refugees. The letter consisted of demands for the safety of Haitian refugees, including the halt of deportations to Haiti, the reinstatement of the Haitian Family Reunification Parole Program, and for Title 42 expulsions to end. Earlier this year, Biden was criticized for deporting more Haitians during his first two months in office than Donald Trump did in his last year as president.

Co-founder and executive director of the Haitian Bridge Alliance, Guerline Jozef, feels that it’s time for the U.S. to “start issuing parole to all Haitians seeking protection at a U.S. border, and refrain from pursuing removal proceedings or detaining or deporting Haitian nationals.”

For Haitian advocates, news of the political crisis has opened up online conversations of the role the U.S. has played in destabilizing countries.

U.S. organizations, such as the Black Alliance for Peace, have called for Haitian solidarity and are using social media as a tool to organize rallies to fight for the rights of Haitian refugees.

Organizations such as the Haitian Bridge Alliance, are collecting donations to help Haitian immigrant communities in becoming self-sufficient in the U.S.

“Haitians are a vital part of our communities, including in states such as Florida, New York and Massachusetts where over a million people are a part of the fabric of our cultural, artistic, and business life,” said Denise Bell, researcher for refugee and migrant rights at Amnesty International USA.

“We stand against both internal and external violence that continues to create chaos in Haiti, and urge the [Biden] Administration to ensure no Haitian seeking safety is turned away or sent back to danger,” she said.