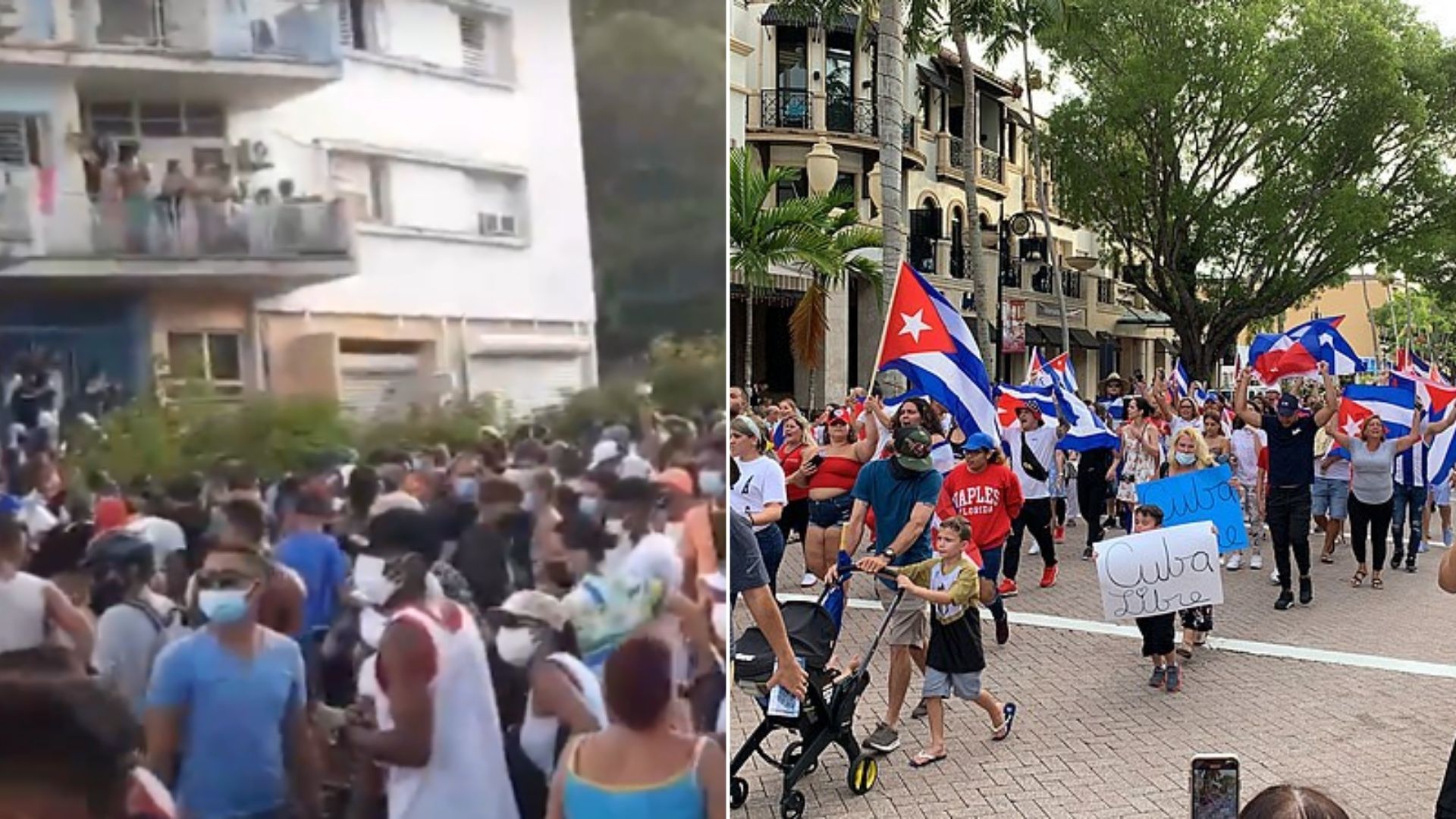 ‘Patria y Vida’: The rallying cry uniting Cubans on the island and in the U.S.

On Sunday July 11, thousands of Cubans in every corner of the island marched to demand change, clamoring, “Patria y Vida.” The movement’s chant was inspired by ​​a song with that same name. The phrase translates to “Country and Life,” directly juxtaposing the Cuban regime’s “Patria o Muerte” — “Country or Death” — stance repeated by the late dictator Fidel Castro. The song, made by artists in Cuba who managed to produce it clandestinely outside of the island, is highly critical of what they consider to be the failed Cuban system.

Ongoing frustration caused by the economic and health crisis resulted in the grassroots uprising, the first of its kind in almost 30 years. Prior to this weekend’s marches, Cubans have spent years making long lines for basic necessities. The persistent shortages of food and medicine were made more dire by the COVID-19 pandemic.

Leading the current protests in Cuba are Afro Cuban activists, who are among the groups which have historically been most affected by the country’s leadership. Many of the protestors on the island have been beaten and detained by the Cuban police and labeled as vandals.

“We demand the rapid release of all those detained and disappeared during and after the demonstrations,” the group wrote. “We call on the government to stop the recruitment of young people in age to serve in the military for the purpose of repressing the Cuban people.”

As people in Cuba peacefully protest for liberty, the Cuban American diaspora is speaking out and demanding action — though many are torn on what exactly that action should be. Much of the American conversation has revolved around Florida political figures and activist groups in the state, home to the largest Cuban population in the U.S.

Roots of Hope, a Miami-based nonprofit, non-partisan movement empowering Cuban youth, called for “world leaders, including the Vatican, to stand with the Cuban people and peacefully intercede in support of their freedom.”

A joint statement by immigrants rights organizations, Florida Rising and the Florida Immigrant Coalition, calls on the U.S. government “to end the embargo on Cuba that is hurting the Cuban people.” Last month the decades-long embargo was condemned by 194 countries at the United Nations.

Movement leaders in South Florida, including Miami Freedom Project, are asking for people to sign on to a letter of support in amplifying the voices of those on the island and contributing to humanitarian relief efforts.

Experts on Cuba are pointing out the complexities of the situation.

Since word of what’s happening in Cuba reached the U.S., protests in solidarity with the Cuban people have erupted in Cuban American communities across the country. The largest of these being in Miami, where Governor Ron DeSantis has faced criticism for supporting the Cuban American protestors — many of whom voted him into office — after recently passing a bill in Florida that activists say is “anti-protest.”

Some leaders are calling for the depoliticization of this humanitarian crisis. Cuban American artist, Pitbull, came out with a powerful video asking for business leaders — such as Amazon founder Jeff Bezos, whose stepfather is Cuban — to support the people on the ground. Afro Cuban American actor Laz Alonso also published an Instagram video detailing the human rights crisis happening on the island.

On Monday, President Joe Biden put out a statement in solidarity with the Cuban people. During his 2020 campaign, the president promised to roll back former President Donald Trump’s sanctions on Cuba, but he hasn’t acted. The latest uprising in Cuba has Biden facing pressure from both Republican and Democratic lawmakers to take political action.