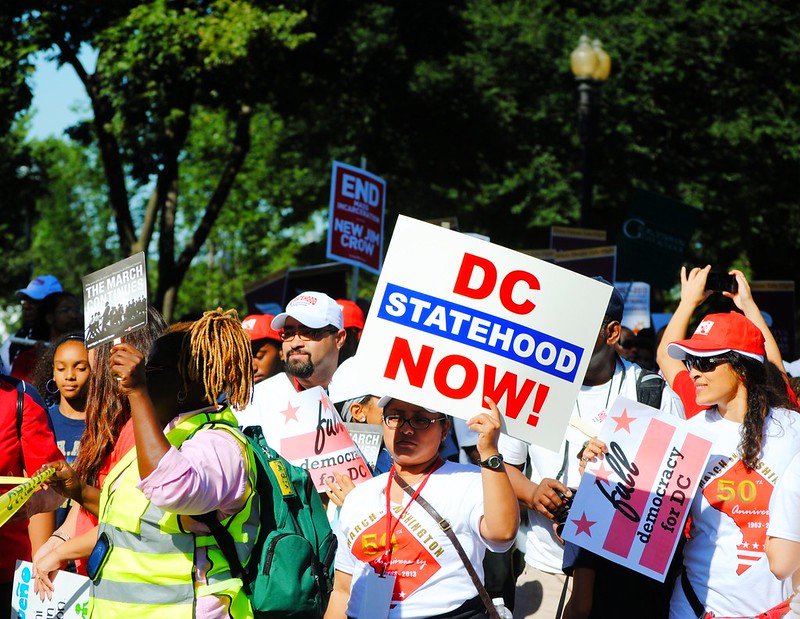 Why communities of color are fighting for D.C. to become a state

Residents of the District of Columbia rejoiced when the House of Representatives passed the Washington D.C. Admission Act last month. The bill would make D.C. the nation’s 51st state and grant its approximate 705,000 residents full voting rights.

Advocates say that without statehood, voting rights and representation in government will continue to be withheld from D.C.’s communities of color. Census numbers show 46% of the city’s residents are Black and 11% are Latino. The metropolitan area is also the only district in the country where Salvadorans make up most of the Latino population.

In the past few years, a lack of representation has caused harm to D.C. residents. Shortages in lifesaving COVID-19 funding and resources were reported during the pandemic. Washingtonians were also left vulnerable to the attacks on their communities during the Jan. 6 insurrection.

Jose Barrios is the president of the D.C. Latino Caucus, a movement that aims to ensure the political participation and involvement of Latinos in D.C. He underscored the seriousness of Latinos needing representation in his city.

“It is more important than ever that we Latinos in the District of Columbia have a proper voice in federal policy and legislation to ensure that the needs of our community are being met without arbitrary interference,” Barrios told Pulso.

Per the U.S. Constitution, residents of the nation’s capital are at the mercy of Congress. Advocates like Barrios agree that changing this power dynamic without statehood would be nearly impossible.

“Congress maintains the right to overturn our local laws — including those affecting Latinos — even though many members of Congress come from faraway districts with little to no understanding of the issues and needs of D.C. residents,” Barrios said.

For many living in the district, the need for statehood has become more critical over the years, particularly in times of crisis. Without representation, Washingtonians were shorted millions of dollars in coronavirus relief funds. D.C. communities also received less access to lifesaving COVID-19 aid, resulting in shortages of Personal Protective Equipment (PPE) and fewer worker protections.

Jamal Holtz is the lead organizer of 51 for 51, a grassroots movement and active partner in Just Democracy, a coalition of 40+ organizations representing communities of color in D.C. He noted that besides the lack of pandemic relief, the Jan. 6 insurrection unveiled how quickly the residents of D.C. are routinely abandoned.

“Mayor [Muriel] Bowser did not have authority to call the National Guard, and we were forced to watch militia members and white supremacists overrun our home. In the aftermath of the insurrection, we bore the cost without a voice,” Holtz told Pulso.

In a 2016 referendum on statehood, 86% of D.C. residents voted in favor of becoming a state. Many obstacles stand in the way of this movement, such as the Senate filibuster, a tool that has been historically used to block civil rights legislation. Because of their lack of representation in federal government, D.C. residents must rely on supporters to put pressure on legislators to pass the Washington D.C. Admission Act.

“No American should be okay with their fellow American citizens not having voting rights,” Holtz said. “We ask the American people to call Congress and urge their elected officials to uphold basic democratic values and make D.C. the 51st state.”

D.C. has a larger population than either Vermont or Wyoming, and pays more in federal income taxes than 22 states. Despite support from President Joe Biden, experts predict the D.C. statehood bill will stall in the Senate.