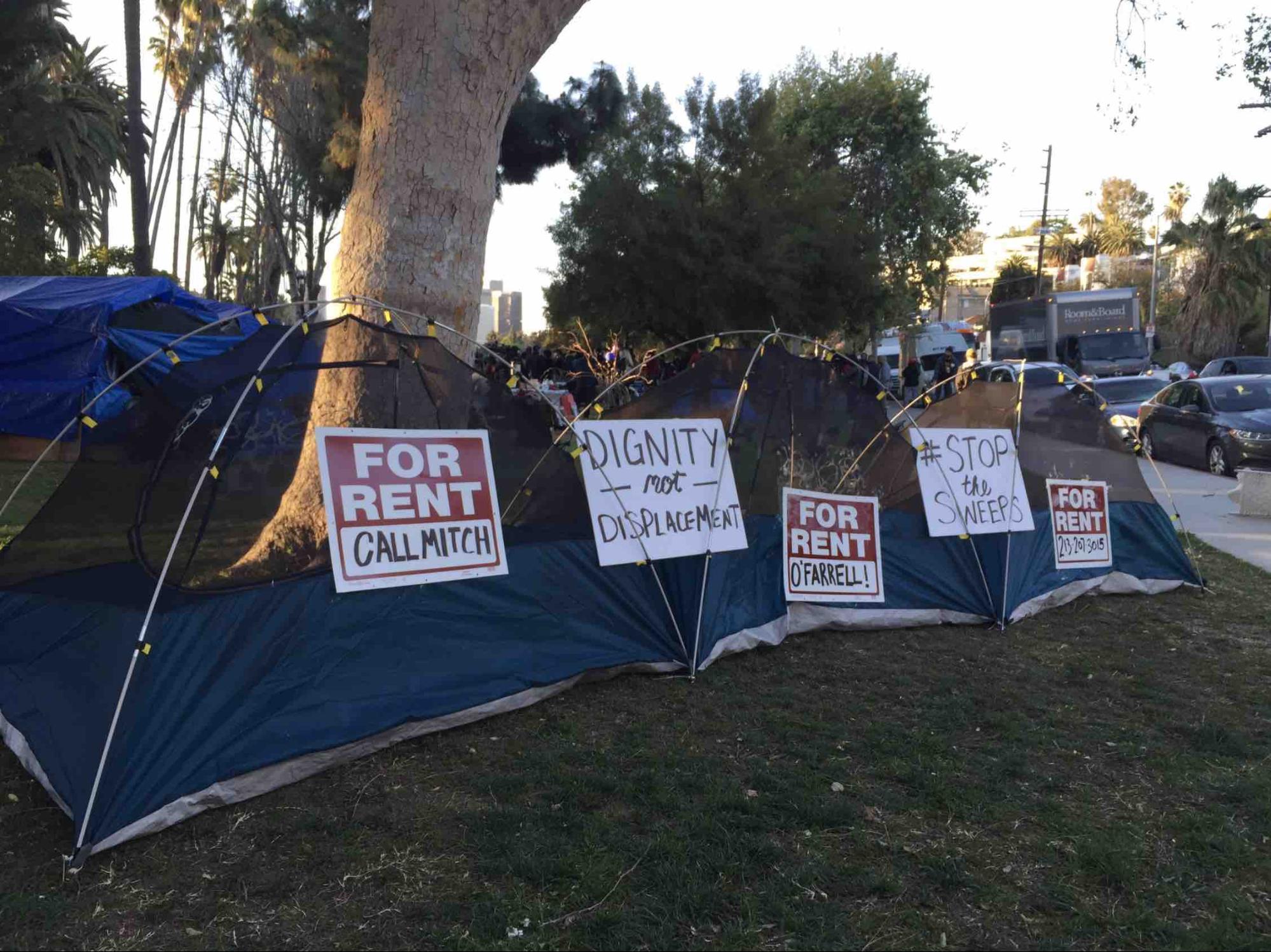 Unhoused and housed residents of Los Angeles’ formerly Latino-majority neighborhood, Echo Park, are urging their city to consider what it’s like to be in a mutual community. Despite mass mobilization of protestors and advocacy groups, the Echo Park Tent Community — made up of hundreds of unhoused people — was destroyed at the end of March.

In response to the uprooting of one of Los Angeles’ largest encampments, the unhoused members released a statement. In it, they described how this community of unnhoused and housed built an organized support system together — with “pioneering forms of therapy” in the midst of government neglect.

The Echo Park Tent Community had one demand for L.A. City Councilmember Mitch O’Farrell, who was instrumental in the destruction of the encampment. “Please continue to leave us alone, or stand with us. Ignore us as if we didn’t exist, much like you’ve been doing and enjoy your corruption and greed, or come out and stand with us.”

In the letter, the group tried to get to the point that the unhoused live in plain sight. Since the COVID pandemic began, housing insecurity has sky-rocketted. Californians, in particular, have been witness to a large swell of houselessness.

The houseless population in Echo Park has been decades in the making. Fifty years ago, the Park’s demographics began to change from majority white home-owners to Latino ones. The neighborhood’s changing demographics threatened the bottom line of local developers, lenders and white homeowner groups. This ultimately led to the city abandoning plans for public housing, systematically pushing out the poor.

While houselessness has increased throughout the COVID-19 pandemic, so have mutual aid networks. “Seeing a garden, a pantry, and jobs program springing up through a partnership between housed and unhoused Angelenos is a truly remarkable event, because it’s a perfect model for starting to integrate people back into community,” said Kelvin Martinez, a mental health provider and organizer.

“It’s been so refreshing to live like a normal citizen again, not like a second-class citizen,” said Ayman Ahmed, an unhoused resident of Echo Park Lake, who lived there for a year.

While the encampment divided much of the broader Echo Park community, it may have brought together unhoused and housed residents toward collaboration like never before. On March 24, protestors confronted the police who were removing unhoused. “Brandishing batons and foam-bullet guns … about 400 police officers in riot gear advanced upon the crowd,” wrote a Los Angeles-based writer.

Although the camp’s removal was met with resistance, the area now sits empty. A barricade on the perimeter of the formerly inhabited park has closed it off to the public. The people who made up the intricate network of support have been moved to other temporary housing, or are looking for their next place to be. But some have pointed out that this does not solve long-term issues. “Permanent housing is what we need, these are just bandaids for a solution,” said community organizer, Carlos Marroquin.

Some unhoused residents feel the encampment at Echo Park had built an alternative to their issue, which has now been squandered. “Homelessness is about human beings having nowhere to go,” Ahmed said. “This was a place that everyone who lived around here, for two miles around, knew they could come to for food and water. Why can’t the city create something like that?”