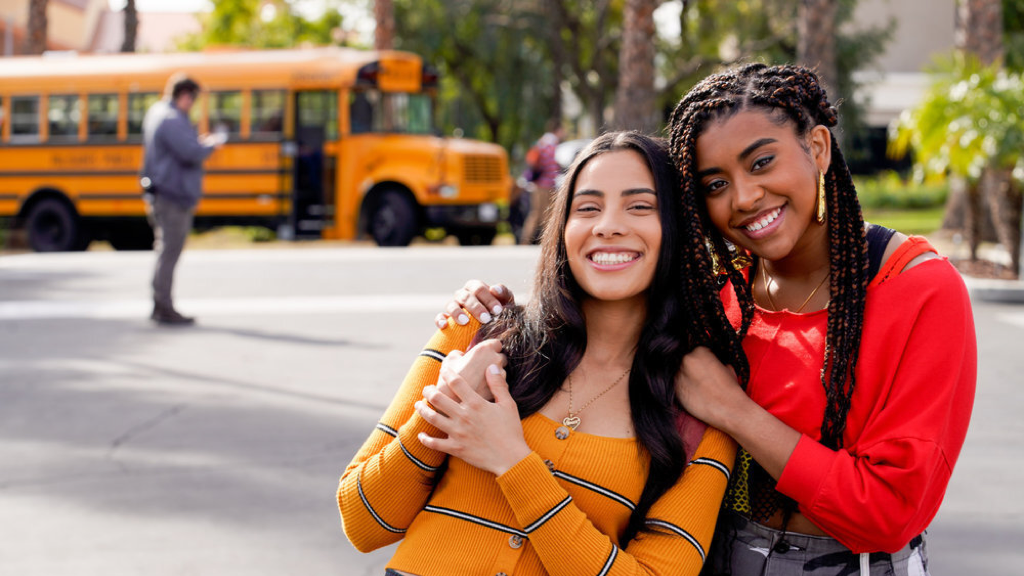 Haskiri Velazquez (left) and Alycia Pascual-Peña star as Daisy and Aisha on the new “Saved By The Bell,” reboot, which premiered on the NBC streaming service Peacock on Wednesday. The two Latina lead actresses are joined on the show by original cast members Mario Lopez and Elizabeth Berkley Lauren. Photo Credit: Casey Durkin/Peacock

Latinas in the entertainment industry made a huge impact this week in music, streaming TV, and even the world of competitive reality dance shows.

NBC’s new Peacock streaming TV reboot of the beloved ‘90s series “Saved by the Bell” debuted on Wednesday and has as two of its leads Latina actresses (in addition to original cast member Mario Lopez, who returns as A.C. Slater). Haskiri Velazquez and Alycia Pascual-Peña play Daisy and Aisha on the show.

Velazquez is already getting attention for taking on some of the character traits of Zack Morris (Mark-Paul Gosselaar) like the ability to freeze time and speak directly to the audience. “The fact that they created a role for a Latina to take Zack’s powers was overwhelming. When Latinas watch this show and meet Daisy and her best friend Aisha, they’ll dream even bigger because we’re living proof that anything is possible,” Velazquez told Entertainment Weekly. This show so far is earning rave early reviews from TV critics.

Over on ABC’s reality show “Dancing With the Stars,” “One Day at a Time” actress Justina Machado competed in Monday night’s finale of the series.

Going into the finals, Machado said she was proud to be a 48-year-old Latina competing in the series and that she hoped her authenticity would help push her over the top on the competition. Unfortunately, when the show was over, Machado had placed fourth on the show, prompting outrage from some fans who felt she should have been ranked higher for her growth through the season and natural talent.

And in music, singer-songwriter Becky G was a big winner at the American Music Awards Sunday night, taking the first-ever award for Favorite Female Singer – Latin. In an emotional acceptance speech, Becky G spoke about her immigrant grandfather. She said, “When it comes to me and the decisions I make in my career, I proudly wave both flags – Mexican and American – and children and grandchildren of immigrants…we have seen what sacrifice and hard work looks like.”
The artist also this week gave an interview to People magazine, speaking about representation, allyship, and other issues relevant to the Latino community.