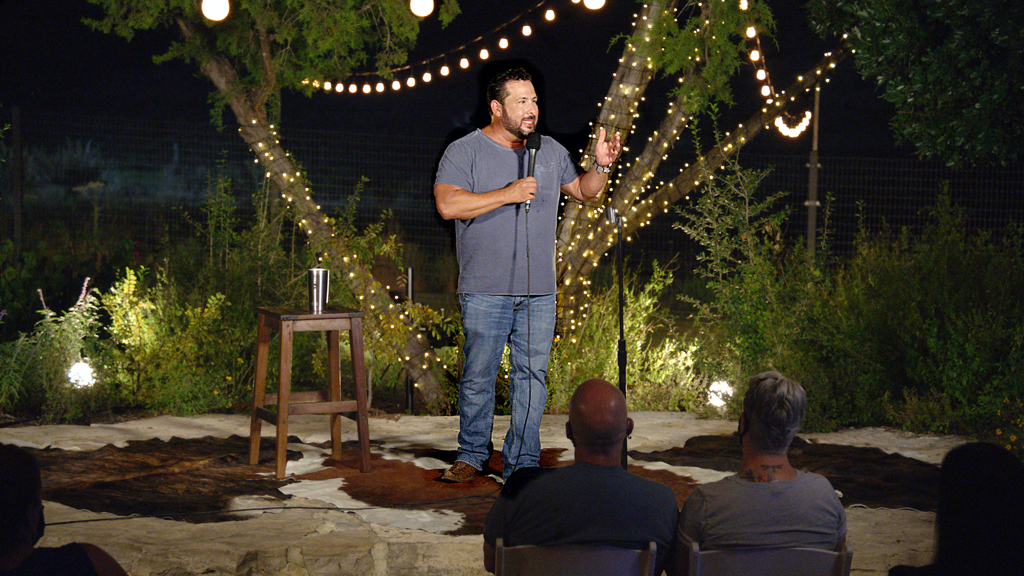 Steve Treviño’s stand-up comedy special, “My Life in Quarantine” was filmed at an outdoor studio in Canyon Lake, Texas, in September. The Latino comedian has been touring the country, but observing strict COVID-19 safety precautions at his shows. Photo credit: Courtesy of Steve Treviño.

Like a lot of America, comedian Steve Treviño was in lockdown in the spring, stuck at home with his wife Renae and his young son Garrett. The Latino comic, who had been performing since 1997 nonstop, was suddenly cut off from his work and the fans who flocked to his live shows.

Going against the tide of many comedians in the entertainment business and even COVID-19-era laws in many states, he decided to get back on the road, carefully. “In the beginning, I got a little bit of backlash, ‘you’re irresponsible, you’re putting people’s lives in danger…’ And my response to them was, you don’t have to come out, but I’ll perform in front of 10 people, 50-feet apart if I have to.”

That idea has been the basis of Treviño’s’s act this year as he has been performing mostly in his home state of Texas, where his family moved back to during the pandemic. He and Renae started a podcast they recorded at home called “Steve Trevino & Captain Evil.” And this fall, as comedy clubs slowly began opening up and more comedians went on the road, he released a full-length comedy special, “My Life in Quarantine,” which includes stories of his months at home as well as a recording of the podcast in front of a live audience (all wearing masks, all social-distanced).

Renae and Steve Treviño co-host the “Steve Trevino & Captain Evil” podcast in front of a live audience as part of his new streaming-TV special “My Life in Quarantine.” Photo credit: Courtesy of Steve Treviño.

Treviño says the transition hasn’t been easy; he no longer gets to interact with fans, taking selfies and signing autographs the way he used to. “I walk on stage. I walk to the green room and I don’t do ‘meet and greet.’ I’m trying to be as responsible as possible, so I’m not shaking 200 hands and getting 200 people sick, you know?”

The special is emotionally raw: he discusses his wife’s miscarriage, his depression, and the seriousness of the COVID-19 panic. But it’s also hilarious; a trip to Home Depot becomes an unexpected opportunity to make a new friend, a haircut is an illegal operation, and close-quarters at home lead to hysterically funny arguments.

While he’s performed at a few indoor clubs that have strict rules about distancing and mask-wearing, Treviño has also done corporate Zoom gigs and outdoor shows this year, including a memorable drive-in performance in Miami. “It was a freakin’ nightmare because instead of them laughing, they would honk the horn or flash the lights at you!”

The comedian says he understands that many people still won’t go out to live performances and he doesn’t want to make his willingness to do shows a controversy. But, he feels that it’s been important to his mental health and the mental health of his audiences to enjoy the feeling of being together. “I haven’t taken my wife to a movie in a year,” he said. “People have made this political, it’s not, it’s about mental health. It’s about being able to go out with your girlfriend, your wife, your husband, and sit down and have a meal and laugh. For my mental health and other people’s mental health, we gotta get out and laugh, you know?”