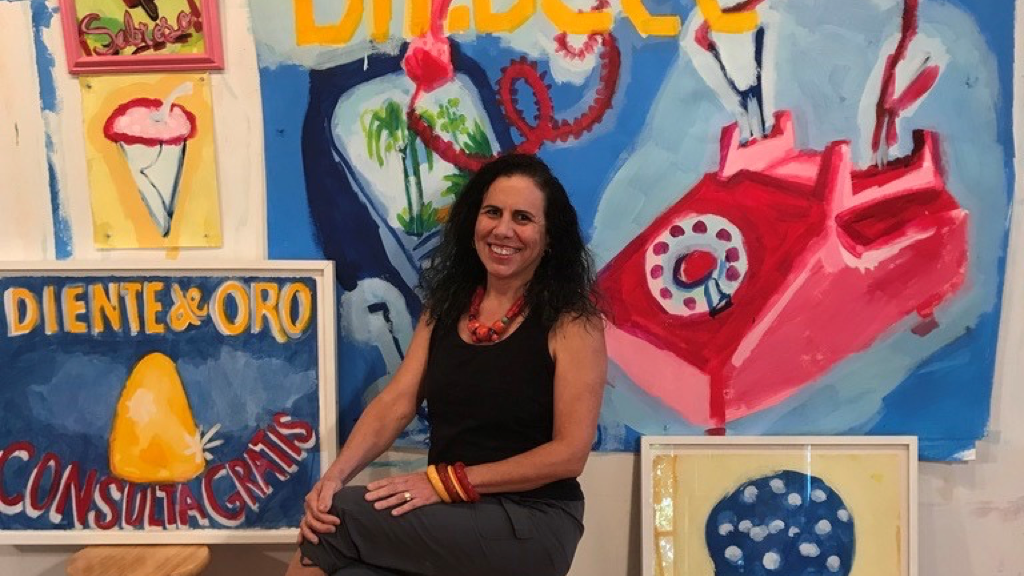 Visual artist Victoria Suescum at her home studio in San Antonio, Texas. The Panamanian-born painter says she has been inspired from a young age by signage artwork on buildings such as auto shops, small grocery marts, and salons in Latino communities. Photo courtesy of Victoria Suescum.

A new art exhibit by a Panamanian artist living in Texas will feel instantly familiar to anyone who has seen the kind of hand-painted advertising artwork that adorns the side of many Latino-owned small businesses.

Victoria Suescum, who first started creating paintings in this style in 1996, remembers the first image that would change the course of her artistic life. In her native country, she saw an advertisement being painted on the side of a building. She shows a photo she’s taken of a similar image than the one that first inspired her.

“So, this is in Panama, and these and these are eight-foot-tall beer bottles. The very first one, I must have been 12 or 14 years old. It was the first time I ever saw someone painting,” Suescaum says.

Many more paintings like this one, on the sides of salons, auto shops, family owned grocery stores and other Latino businesses for the next three decades drove Suescum’s work, which has been featured in museums in Panama as well as the U.S., where she lives in San Antonio. In exhibits like her current one, Tienditas, at the McNay Art Museum, Suescum recreates a kind of anonymous street art with emoji-like visual language that she says has elements of both commercial and folk art. “There’s murals, there’s tagging, and then there’s this kind of painting. I call it ‘Vernacular art,’” she says.

There are bowls of salsa and gleaming cobs of corn. There are hot-rod cars and there are pigs wearing glasses, inviting you to come buy some pork. Snowcones and painted fingernails and golden jewelry beckon customers. Suescum says she sees this kind of artwork in many Latino communities, whether it’s in the U.S., Mexico, Honduras, Ecuador, or where she grew up in Panama.

They are street art, and Suescum says it took her many years of study to understand that her interpretation of this kind of art was just as artistically valid as anything taught in art school. For years, she felt she was behind her schoolmates because she wasn’t exposed to the same kind of education.

“Where I was growing in Panama, there were no museums,” she says. “Mi museo está en la calle, my museum is in the streets.”

“High Performing Low Rider” is an acrylic painting by artist Victoria Suescum. Like many paintings in her collections, it’s inspired by advertisement art on many Latino-owned small businesses. Photo credit: Contributed by Victoria Suescum

After graduating from Wellesley College in 1983, she realized she had developed her own path. “And you know what? Nobody’s painting this stuff. I love it. This is my cultural tradition.”

Suescum went on to graduate with a Master of Fine Arts degree from the University of Texas at San Antonio. She has taken hundreds of photos of building advertisements and puts her own variations on the paintings she creates. Many of the advertisements she’s seen, she says, are painted anonymously, often by migrant laborers who move on once they’ve done the work. The colorful paintings are playful and witty; they sometimes contain misspelled words or words that are intentionally misused for comedic effect, like a seafood dish with the word “BISTEC” (a beef steak) boldly written above the plate.

Some of the paintings can last decades. Suescum says she often sees halos around paintings, evidence that the ads have been repainted or that the walls of a building have been painted around the artwork to preserve the images.

As businesses come and go and buildings eventually get torn down, Suescum sees part of her role as an artist as preserving this unique work.“Some of these ads are there for 10 years and then it’s gone. So my paintings are what’s left,” she said.