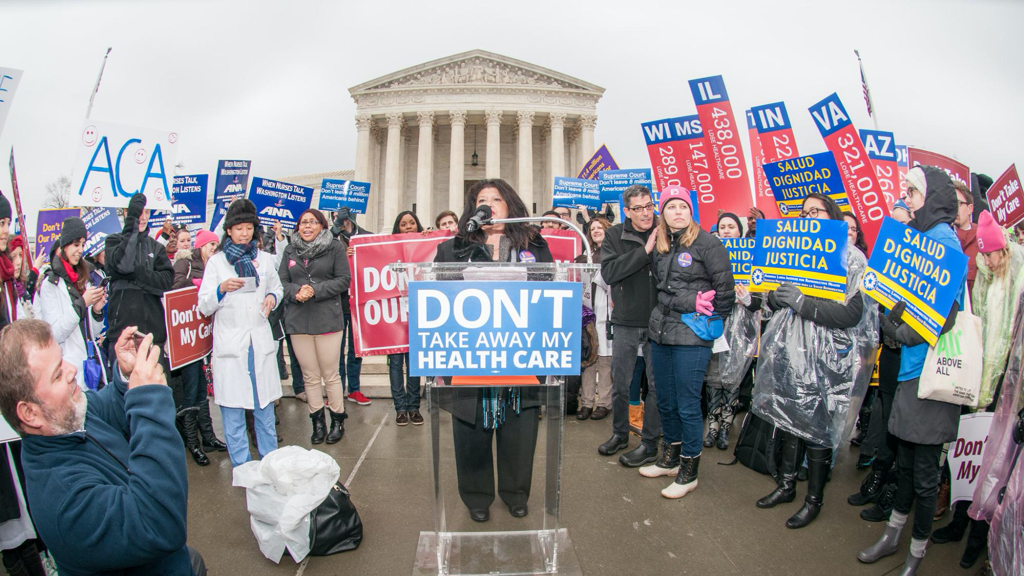 The U.S. Supreme Court will hear arguments today in a case seeking to invalidate the Affordable Care Act (ACA), also known as Obamacare. The issue of health care has been a major one this election year and has become more critical during the COVID-19 pandemic. Any change to the ACA would impact millions of Latinos. Last year, Latinos had the highest percentage of any group at 17% without health coverage. That number is likely higher for 2020, given unemployment caused by the COVID-19 pandemic.

Today’s case which aims to make ACA invalid, on the grounds that a change in its tax penalty for not having health coverage is unconstitutional. It’s one of the first cases for new Justice Amy Coney Barrett, whose selection for the court has raised fears that a conservative majority on the court could spell the end of the ACA.

After arguments today, a decision by the Supreme Court could come in the spring. In the meantime, experts say that a repeal of the ACA could mean 21 million Americans would lose their health coverage during a pandemic.

The case was brought on by 18 Republican state attorney generals and the current presidential administration in Texas district court. They argue that a congressional decision to reduce the tax penalty for having health insurance invalidates the entire Affordable Care Act. In 2017, Congress dropped the amount to $0, effectively eliminating the penalty. The suit says that because a tax can’t be charged at zero, it makes the ACA invalid.

This effort to repeal ACA through the Supreme Court is expected to face an uphill battle; Barrett herself said during her confirmation hearings that she was open to the idea of separating the tax from the ACA in order to keep the Affordable Care Act going.

At an October 15 event in support of protecting the Affordable Care Act (ACA), Milena Oberti-Lanz, executive director, Maternal and Child Health Consortium, spoke about the need for accessible health coverage. Latinos gained the most number of people covered after the ACA went into effect in 2010. Photo credit: Governor Tom Wolf/Flickr

A repeal of health coverage could be disastrous for those without other insurance options could be disastrous, some experts say. “In Texas, there is no expanded Medicaid. The rules are really harsh,” said Joe Ibarra, co-chair of EnrollSA, a group that helps enroll people for health coverage in San Antonio, Texas. In some states such as Louisiana and Michigan, Medicaid was expanded to offer government-run healthcare for those who can’t get private health insurance.

“Folks are losing coverage as a result of losing their jobs and they are left without good options,” Ibarra told NBC News.

When the Affordable Care Act went into effect in 2010, Latinos benefited the most among U.S. groups with more than 4 million adults and 600,000 children gaining health care coverage within the next six years.