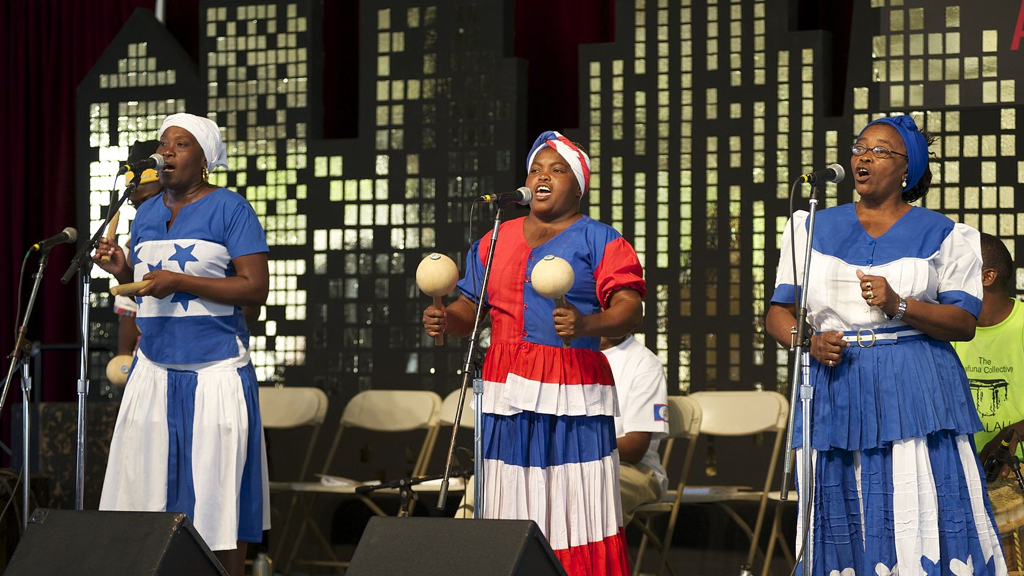 The Garífunas live across the U.S., and their population in New York alone is between 70,000 to 100,000. They have resisted erasure, violence and discrimination in Latin America and the U.S. Photo: Wikimedia Commons

October 12th is Indigenous People’s Day — a day formerly known as “Columbus Day” and reclaimed to acknowledge Indigenous resistance to centuries of colonialism. The day helps indigenous groups raise awareness of discrimination, violence and erasure that are long-lasting impacts of the conquista and colonization.

One group that faces ongoing threats against self-determination is the Garífuna.They are descendants of enslaved Africans and the indigenous people of Central America, and now live across the world, including in the U.S. They have their own language, customs and traditions that are different from mainstream ideas of what “Latino” means.

The Garífuna living in the U.S. are descendents of Black and Indigenous communities, yet because they are of Latin American descent, they have, in the past, been prompted to only choose one box in the U.S. Census — Hispanic. “You can’t check Black. You speak Spanish. You have to check Hispanic,” U.S. Garifuna Gilberto Amaya lamented, about the process.

Amaya, who was born in Honduras in the late 1940s and moved to the U.S. in 1992, spearheaded an effort that changed this norm in the 2020 Census, making it possible for Afro Latinos, and especially Garífuna, to make themselves known. Although New York’s Garífuna population alone is between 70,000 to 100,000, “we don’t really show up in decennial Census data,” Amaya explained. His contributions for this years’ Census helped bring visibility to his people and the deep history of their resistance and migration.

Beyond this lack of representation, the Garífunas are also like many other Latino indigenous groups, in that they face a unique threat to their land and community. In the summer of 2020, residents of the Honduran Indigenous community reported some of their activists were kidnapped. One of the people abducted is Alberth Snider Centeno Thomas, a community activist who advocated for compensation of Garifuna land that the Honudran government had stolen.

As of September 5th, the Garífuna leaders were still missing. “Through capitalism and state-sanctioned violence, the government is erasing the cultural and identity richness that the Garífuna people bring to Honduras,” wrote Massay Crisanto, a Garífuna cultural ambassador and human rights activist.

But part of Indigenous People’s Day is to celebrate ongoing resistance. People like Crisanto and Amaya push forward the message of autonomy of their community. Amaya died in June, and he’s remembered as one part of a deep legacy of Black and Indigenous resistance everywhere. In 2019, when talking about the invisibility of his people, he said, “We have our challenges,” but recognized that the Garífuna’s “fierce resilience” will push their existence forward.