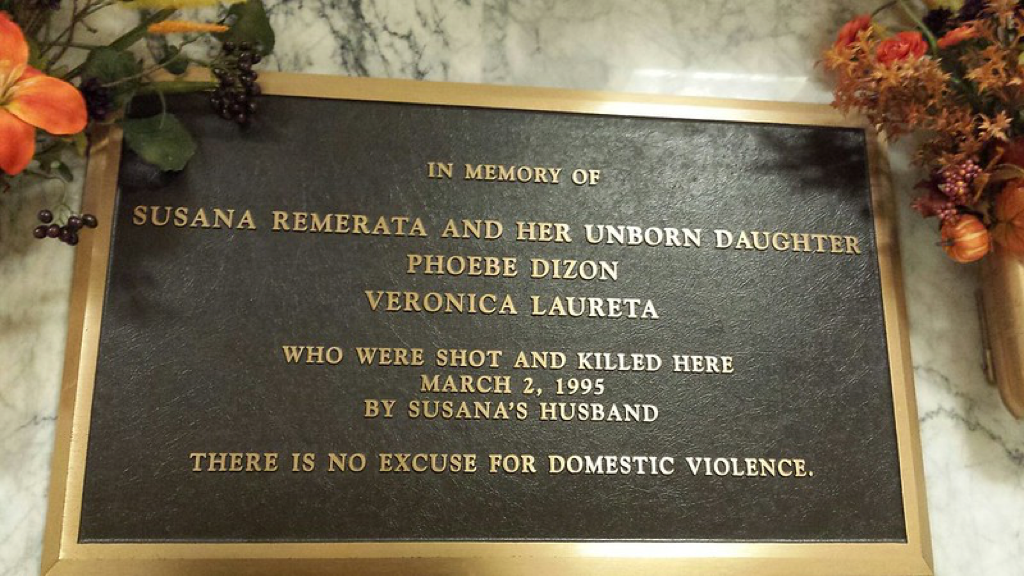 A plaque at the King County Courthouse in Seattle, Washington, commemorates a woman who was targeted in a mass shooting committed by her husband. October is Domestic Violence Awareness Month. Photo credit: Wonderlane/Flickr

October has marked National Domestic Violence Awareness Month since 1989, when Congress first passed a law aiming to bring attention to victims of violence at home. But 2020 is giving the month-long campaign added significance due to a sharp rise in incidents of domestic violence, by as much as 35% in some major cities, according to reports.

Groups that support victims of domestic violence say Latinas are more likely to be in this group than the general population, with 1 in 3 Latinas having experienced abuse from a partner. Immigrants in particular are vulnerable, experts say, due to an unwillingness to report domestic violence to police or to seek medical care or the help of community resources when abuse occurs.

During the pandemic, many families have spent more time at home with insufficient help for childcare or to get back to work. Added to that are fears about the COVID-19 virus and wage and job losses for many, and “the financial stress alone creates a ticking time bomb for some families with a history of domestic violence,” said Steve Mueller, sheriff of Cherokee County in South Carolina.

“Ana,” a domestic violence victim in Phoenix, Arizona, who asked that her name not be used in an interview with ABC15 News, said the pandemic increased stress in her 30-year marriage. She said her husband punched and kicked her, and broke her ribs, but she did not seek help at first because she doesn’t speak English. She eventually found help with Padres y Parientes de Víctimas de Crimen, a local nonprofit.

“It still hurts to talk about it,” Ana told ABC15 in Spanish.

Advocates say that seeking out community resources, whether it’s a shelter or financial help and emotional support for getting out of an abusive situation is crucial. The National [email protected] Network has a page with information for those trying to help victims as well as public-awareness flyers and training programs.

Individual organizations such as Latina SafeHouse in Denver, Colorado, and Los Angeles Women’s Center are committed to providing help as well, even as they see an uptick in cases during the pandemic.

Nationwide, the National Domestic Violence Hotline has a website, thehotline.org, and a 24-hour phone line at 1-800-799-SAFE (7233) available in English and Spanish. Its website has a feature that allows viewers to hit Escape twice or click on an Exit button to quickly leave the site in case a victim reaching out is in danger of being caught viewing the information. The Hotline also suggests those viewing the site clear their browser’s website history if they are worried their online activity will be found by an abuser.