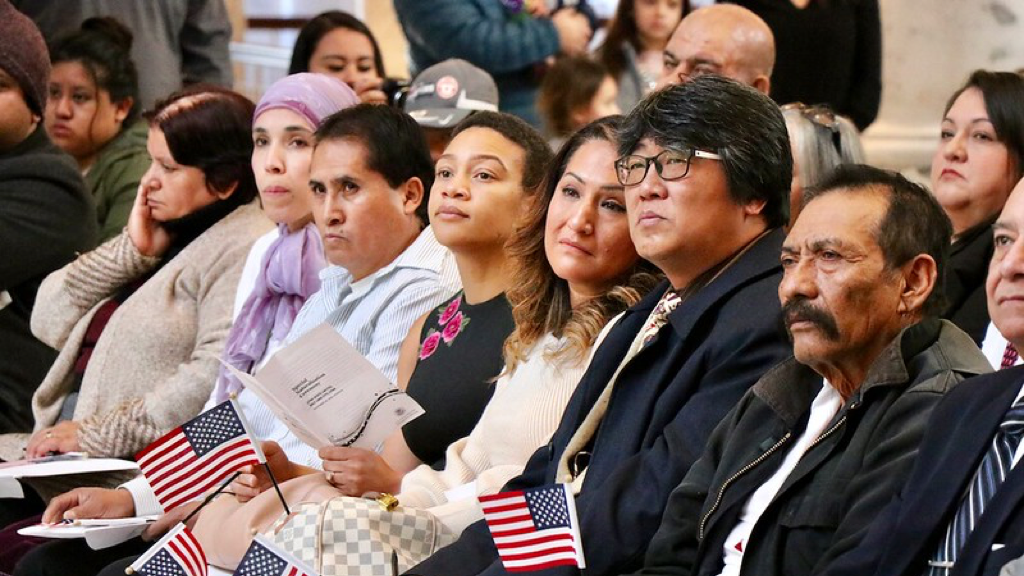 Applicants rushing to file for U.S. citizenship before fee increase

A naturalization ceremony at the Utah Capitol building that took place in December 2018. In October the application fee to become a U.S. citizen is increasing, leading advocates to fight the increase in court and to seek assistance for those who are applying. Photo credit: Utah House of Representatives/Flickr

Update: A California judge has blocked the fee increase based on the New York lawsuit.

Latinos and others seeking to become U.S. citizens are being urged to complete naturalization applications and advocates are raising funds to help some of them before a filing fee increase goes into effect on Oct. 2.

The 81% increase will make the fee $1,225 and will eliminate two options that were available for a reduced or waived fee for low-income applicants. The new fees were announced on July 31.

Diana Garcia Hernandez, a 24-year-old single mother of two, started applying for citizenship this month and was aware that the new fees meant she had to hurry. “I couldn’t believe how much the fees were increasing,” she said in a Chicago Sun-Times article. “It put me in the high gear to get everything ready to apply before the deadline”

The increase comes during a year in which the COVID-19 pandemic has put many out of work and battered the economy. Advocates for applicants say the pandemic was already causing delays in the citizenship process for many, and that the fee increase may make it harder for those who want to get naturalized.

As many as half of legal permanent resident applicants qualified for a fee waiver between 2006 and 2017, according to a Stanford University Immigration Policy Law study. Citing this study, Martha Laura Garcia-Izaguirre, a supervising attorney at the New Mexico Immigration Law Center said, “These measures will not only discourage eligible green card holders from naturalizing, but make it impossible for them to apply.”

Legal residency cards are also referred to as “Green Cards.”

A lawsuit filed in August by San Francisco-based Immigrant Legal Resources Center is seeking to block the fee hikes. In the lawsuit, the plaintiffs argue that the agency had a budget surplus and is not accounting for how it spends its money.

The current fee, which has been in place since 2016, is $640. Applicants under the age of 75 also have to pay an $85 nonrefundable “biometric fee” for photos, digital fingerprinting, and a digital signature, which are required to apply. The Department of Homeland Security said in a statement that the fee increase is to cover operational costs that would otherwise put the U.S. Citizenship and Immigration Services department $1 billion in debt.
Last December, a federal court blocked a move by the Trump administration to remove one of the criteria for waiving citizen application fees.