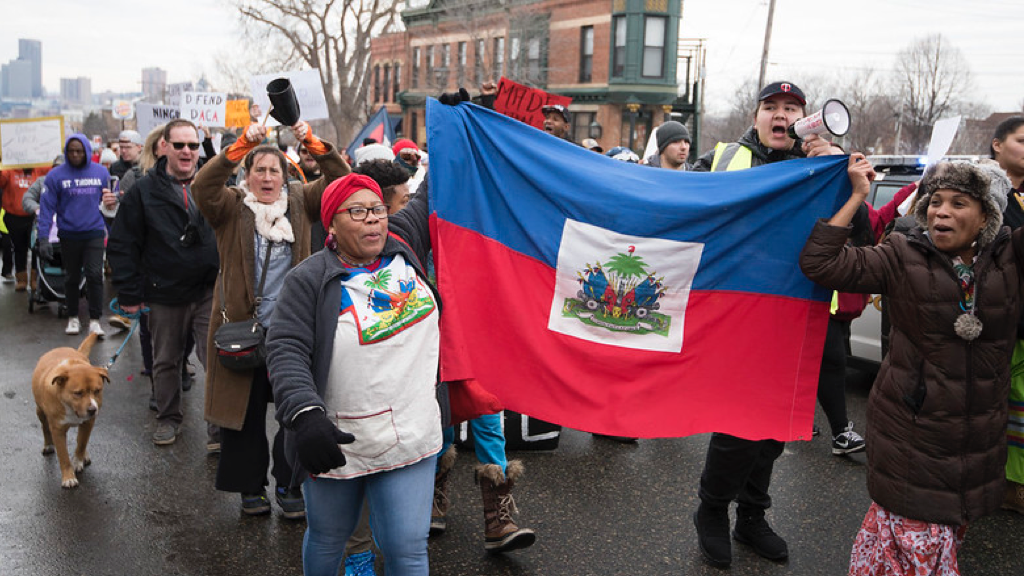 400,000 in U.S. to lose immigration status after court ruling

Protesters in St. Paul, Minnesota, march in January 2018 in support of Temporary Protected Status for immigrants from countries such as El Salvador and Haiti. A federal court ruled those protections could be terminated, leaving immigrants in the U.S. under TPS vulnerable to deportation. Photo credit: Fibonacci Blue/Flickr

A federal court ruled on September 14 that temporary protections for immigrants from countries such as El Salvador and Haiti working and living in the U.S. could be terminated by the Trump administration. That could leave about 400,000 undocumented immigrants in the U.S. vulnerable to deportation next year. About 130,000 of those migrants are essential workers.

TPS or Temporary Protection Status, has allowed hundreds of thousands of immigrants to flee to the U.S. after earthquakes, hurricanes, and civil war. But the Trump administration argued that some of the incidents that brought immigrants to the country were so long ago that TPS residency couldn’t be considered “Temporary.” The court agreed and the program is expected to end on March 5, 2021 for five affected countries, Haiti, Nicaragua, Sudan, Honduras, and Nepal, and Nov. 5, 2021 for El Salvador. The fates of immigrants from Nepal and Honduras could also be affected by a separate court case.

If Trump is not re-elected as president in November, a new administration could opt to continue the TPS program.

Part of the arguments in the case, rejected by a 2-1 vote by the United States Court of Appeals for the Ninth Circuit, was that the Trump administration’s move to end TPS was racially motivated. The court was not swayed by the argument that Trump has racial and anti-immigrant bias, as shown in public comments, including a January 2018 comment in which he referred to some of the nations where TPS recipients came from as “shithole countries.” The Court, however, did say it did not agree with those comments, stating that judges “do not condone the offensive and disparaging nature of the President’s remarks.”

In Boston, a rally that followed the ruling included advocates who say they are pushing for legislation to give TPS recipients a pathway for legal status. José Palma, a Salvadoran TPS holder and member of the executive committee of the National TPS Alliance, said he’s hopeful that the case could go to the Supreme Court or that a new presidential administration would reverse course. His daughter, 15-year-old Angela Palma, said this is the latest fight for her family after she and her parents have fought for the Dream Act and for an increase in the minimum wage.

“Now at 15, I’m fighting for my parents to stay in the U.S.,” she said. “My parents came here for a better life and I will continue fighting next to them. We need residency now.”