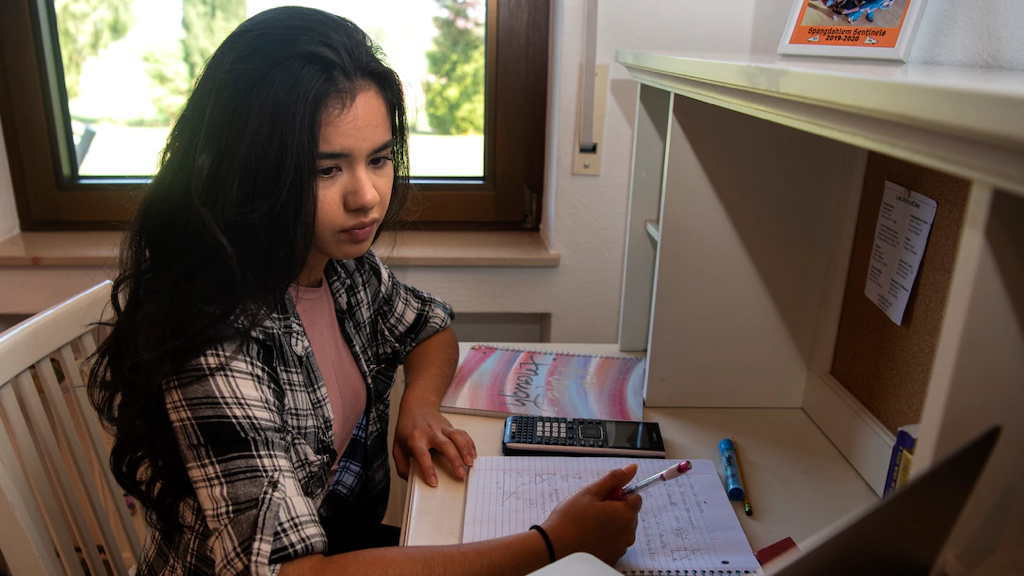 Latinos across the country are sending their children back to school, be it at home or on campus. While some Latino families need their children to attend in-person classes, others are choosing a virtual setting. Photo credit: Valerie R. Seelye/U.S. Air Force

It’s back-to-school time, and a new study finds most Latino families have mixed feelings about remote learning, with the majority supporting it despite the technical troubles and social isolation it brings.Yet, for many of these families who don’t have the resources to keep their kids home despite COVID-19 dangers, sending their children to school is a risk they’re forced to take.

Across the country, students experience different learning environments depending on where they live — or on the needs of the family. Even with guidelines from the Centers for Disease Control and Prevention on preparing for a safe return to school, the picture looks different from state to state, county to county, and even school district to school district.

In Arizona, for example, top officials implemented an order over the summer requiring that schools look at data when deciding on when to re-open for in-person classes. That resulted in some districts opening their campuses in mid-August, with others choosing to delay in-person instruction until October.

While most school districts in the Phoenix metro area have decided on virtual-only instruction for the time being, they are still required under Gov. Doug Ducey’s order to have at least one site open for in-person instruction for students “who need a place to go during the day.”

Griffith Elementary, in a low-income east Phoenix neighborhood, is one of those schools that opened for in-person instruction. Principal Robert Holmes told The Arizona Republic that his students need the school resources while their parents are away at work.

Similar situations can be found in south Phoenix, a predominantly Black and Latino neighborhood with higher-than-average COVID-19 cases. “I understand there are some parents that for them, school is like a daycare too,” said Herlinda Calderón, a south Phoenix resident and mother of two young children. “They need it because both of the parents work. I sympathize with that.”

Still, she said, she prefers to keep her children home out of caution.

Latinos make up 30% of coronavirus cases in Arizona. Whites, on the other hand, make up 23% of all reported cases. The race and ethnicity of 34% of the cases are unknown.

Marisol Garcia is a social studies teacher in a west Phoenix elementary school district, which has a large Latino population. “As a middle school teacher, I know that public educators are doing everything they can to make sure our students have quality learning experiences this fall. As a mother of a high school freshman, I know that it’s far from perfect,” she said during the 2020 Democoratic National Convention Roll Call Across America.

A study by Latino Decisions found that while a majority of Latino households (68%) support at-home instruction during the pandemic, 83% are worried their children will fall behind.

A third of respondents said they don’t have regular internet access at home; and of those who do, 37% said they only get it through their phones.

Back in April, the Arizona Department of Education reported that 100,000 students needed computers and internet access to participate in virtual classes.