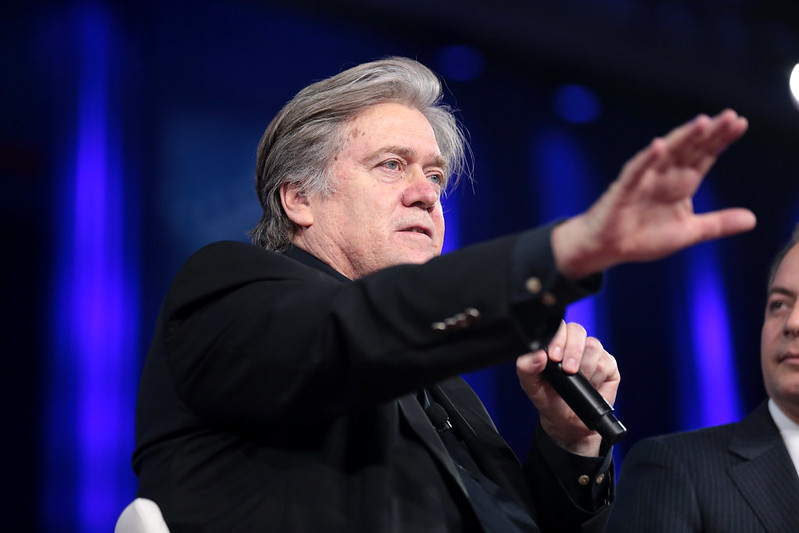 Steve Bannon, three others charged with diverting ‘We Build the Wall’ funds

The U.S Justice Department on Thursday morning charged former White House chief strategist Steve Bannon and three other men with fraud in connection to a “We Build the Wall” fundraising campaign that originated on GoFundMe in late 2018.

Steve Bannon, the former White House chief strategist, was arrested Thursday in connection to the fraud case, which accuses the campaign organizers of diverting donated funds to themselves. Bannon himself is accused of taking more than $1 million from the more than $25 million raised through a nonprofit he controlled, The Washington Post reports.

The campaign was fueled by president Donald Trump’s rhetoric on building a wall along the U.S.-Mexico border, a project that many experts deemed unfeasible as far back as 2016. For Latinos in the U.S., the proposed wall has also come to represent a symbol of racial divides and hatred toward immigrants from Latin America. According to Gallup polling, a solid majority of Americans, about 60%, oppose new construction of a border wall.

Since the GoFundMe campaign fell short of its $1 billion goal, the crowd funding website refunded $20 million to donors. But the organizer of that campaign, Brian Kolfage pressed on, forming “We Build the Wall, Inc.”. In a press release, Kolfage, an Iraq War veteran, stated, “I personally will not take a penny of compensation from these donations incurred in the furtherance of this mission.” Kolfage was one of the four charged with fraud on Thursday. In addition to his military background, Kolfage also had a history of spearheading a right-wing website that pushed conspiracy theories and political misinformation, according to reports.

Construction of parts of this privately funded border wall were continuing in Texas late last year, despite orders from a district judge to stop. On the federal side, only five new miles of southern border wall have been built to date despite billions of dollars being allocated to the project, according to government documents.

On Thursday, Trump appeared to be distancing himself from the campaign. He told White House reporters that he didn’t “know anything about the project at all” and didn’t like it because it was “being done for showboating reasons,” Wall Street Journal White House correspondent Rebecca Ballhaus reported.

Trump tells reporters of the We Build the Wall campaign both that he didn’t “know anything about the project at all” and that he “didn’t like that project” because he thought it was “being done for showboating reasons.”