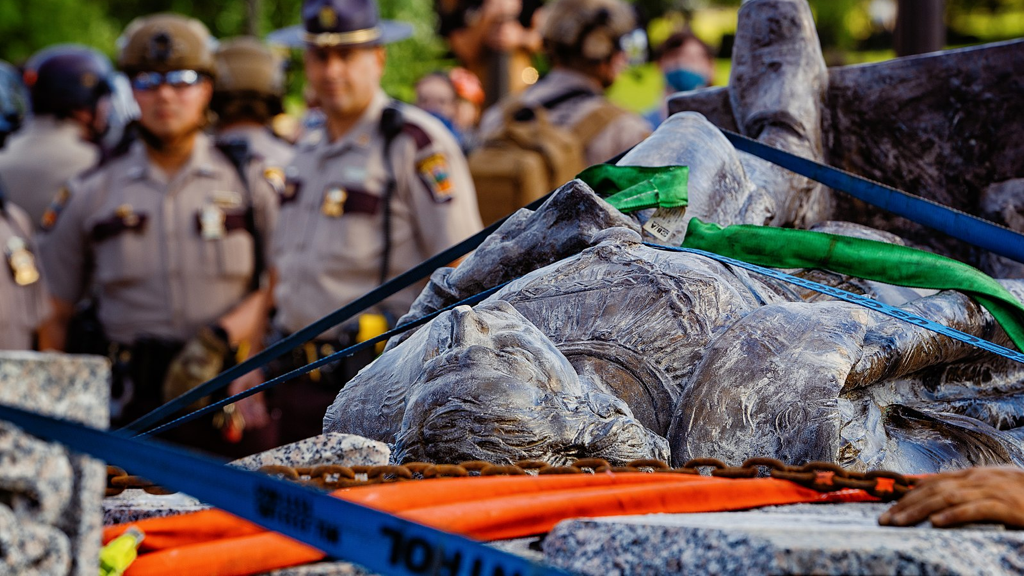 Across the country, statues of oppressors continue crashing down

Pressure grows on authorities to remove statues of oppressors in history across the country. A fallen Christopher Columbus statue toppled in St. Paul, Minnesota on June 10. The statue has been called a “symbol of genocide.” Photo: Wikimedia Commons

In the past month, Christopher Columbus was beheaded, smashed onto a concrete sidewalk, and plummeted down to the bottom of a lake. A movement to take down monuments has prompted Black people, Latinos, Native people, and allies to destroy statues of this continent’s pioneering colonizer, and shift the conversation on who we, as a nation, choose to memorialize.

Statues began to come down after the killing of George Floyd, a Black man who died at the hands of police on May 26. The protests that followed his death marked a new phase of energetic public demonstrations when a police precinct was lit on fire. Within days, calls to defund the police fueled a national conversation around white supremacy and public symbols steeped in slavery, segregation, and discrimination. Just yesterday, July 1, officials in Boston voted to remove a statue of Lincoln with a freed Black man at his feet.

Since this take-down movement started, groups of people (in some cases hundreds), have joined together to deface, rip down, and celebrate the destruction of these memorials. In cities such as Richmond, Raleigh, and Houston, these action has been supported by public policy to remove these symbols of racism.

One of these removals happened in Albuquerque, New Mexico on June 15, where a statue of the colonizer Juan de Oñate resulted in members from a white militia group shooting at the protesters. The reason the activists wanted to remove the statue in the first place was because “Oñate was a murderer and rapist,” Elena Ortiz (who also goes by her indigenous name Ohkay Owingeh), explained to Indianz.com. She heads the Santa Fe activist group, The Red Nation.

For many Black, Latino, and Native people like Ortiz, giving homage to leaders like George Washington and Christopher Columbus means idolizing those who kidnapped, raped, and tortured their ancestors in the U.S. and across Latin America, she said.

Luis Peña, another activist from New Mexico, says public memorials are a way for a society to shape history. He started a petition to remove a separate statue of Oñate in Rio Arriba, north of Santa Fe, before it was taken down. “Symbols are important, they shape the way we ingest the world. In reclaiming these symbols, we get a chance to tell a side of history that has been left out of the books,” he said.