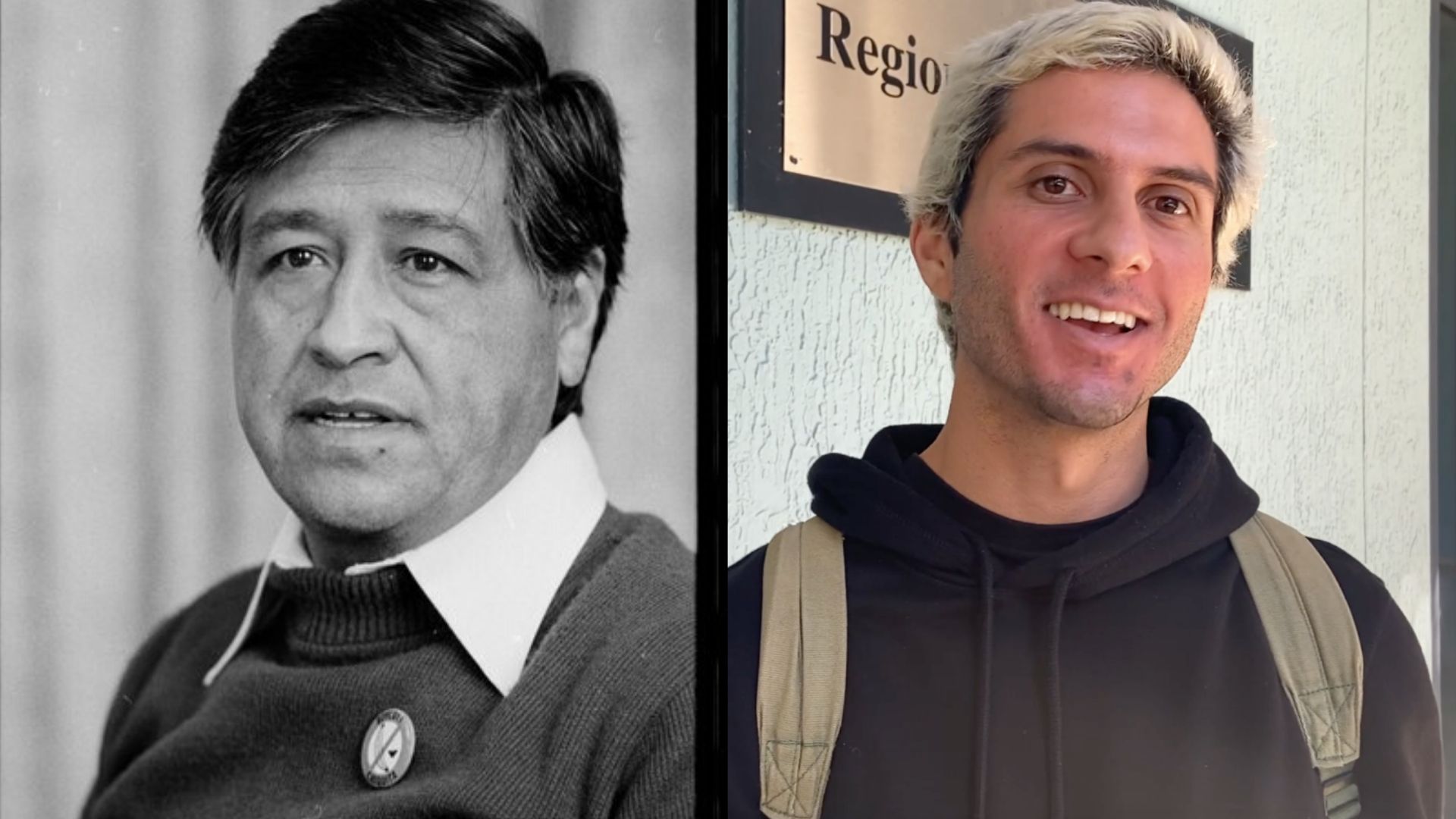 César Chávez’s grandson is on his own social justice mission

In 2018, Eduardo Chávez (right) found a calling in storytelling and teaching others about the legacy of his grandfather César Chávez (shown here, on the left, in 1979). Photo credit: On right Wikimedia Commons, on left by Lisann Ramos, Pulso.

Civil rights hero César Chávez would be disturbed if he saw the plight of farmworkers today, especially in the midst of the coronavirus pandemic. But his legacy is being picked up by his grandson Eduardo Chávez.

César fought tirelessly for farmworker’s rights until his death in 1993. He would have been 93 years old this March 31. In the 1960s, César led the formation of the United Farm Workers union, a major step forward for Mexican-American rights in the United States.

His grandson Eduardo is a filmmaker and, inspired by his grandfather, is now an activist as well. Eduardo’s dad, Fernando Chávez, grew up working in fields and picking fruit, just like his father before him, until Fernando was given the opportunity to focus on school and became a successful attorney. Because of this, Eduardo grew up in a privileged household. Even though his grandfather led one of the largest civil rights movements in U.S. history, he died when Eduardo was just a baby. He always felt removed from his family’s contributions to Chicano history, Eduardo said.

When meeting people for the first time, Eduardo would often hear about how important his grandfather was. Yet, he didn’t fully understand his grandfather’s legacy for himself. That is until 2018, when he began to feel there was something missing from his life. At 24 years old, he decided to work on a vineyard in Sonoma, California for one month. He wanted to form his own personal connection to his grandfather and experience first-hand the physical labor conditions that César fought to improve.

What he learned was that the state of farmworkers has changed since the time of César Chávez’s movement, but not always for the better. The majority of farmworkers are not U.S. citizens, which wasn’t the case in the 1960s. Many of the men that Eduardo worked with were undocumented, and don’t have access to the protections César would have wanted for them.

“That was extremely difficult work,” said Eduardo. “Seeing the workers in those conditions for such low wages, it really gave me some perspective of this huge undercurrent of American society of workers that are still being exploited,” he said.

Eduardo turned his experience into a documentary that he called “Hailing Cesar”. Through filming, he was able to better understand the physical and emotional struggles his grandfather underwent in order to stand up for what he believed in, which included his multiple hunger strikes. “My grandfather is a really good example of an ordinary human who did extraordinary things. He just had an extremely incredible work ethic and a passion for organizing workers,” said Eduardo.” Eduardo said.

In the documentary, Eduardo also learns about his own father’s experiences working in the fields, including enduring violent racist attacks from people who would use guns to shoot at the workers. It was through the documentary that Eduardo was able to hear these stories from his father’s past for the very first time.

This journey also encouraged Eduardo to teach future generations about his grandfather’s contribution to U.S. history. He now travels to universities all over the country showing his film, as well as volunteering his time to talk to young kids about the realities of farmwork and where we get our food.

Eduardo was also inspired to continue his grandfather’s work by fighting for undocumented farmworks in political spheres. “I always tell young people to register to vote, especially for this upcoming election,” said Eduardo. “There’s definitely some candidates out there that are going to give a voice to so many voiceless people, including the undocumented population.”