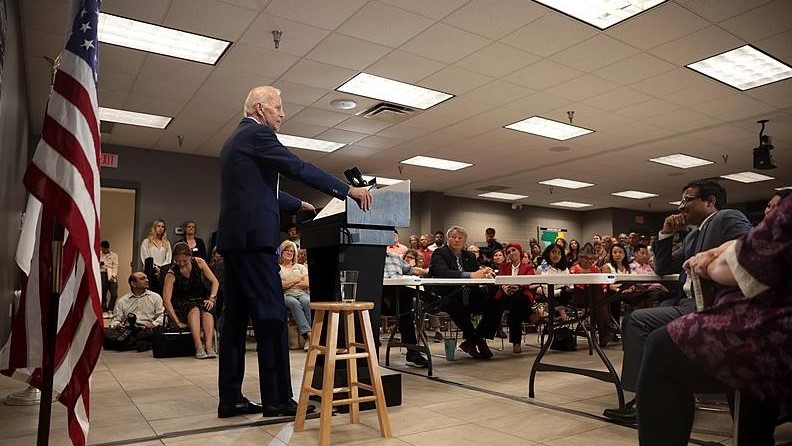 Biden faces backlash for inability to connect with Latinos

Democratic presidential candidate and frontrunner Joe Biden who has already qualified for the next Democratic presidential primary debate on Dec. 19, is having a problem connecting with the Hispanic community. At a November South Carolina town hall, Biden was confronted by a prodding immigration advocate over his uncertain immigration policies. Only a few days earlier, Biden’s top Hispanic adviser resigned from his campaign over frustrations about the campaign’s Latino messaging.

Vanessa Cardenas was the Biden campaign’s National Coalitions Director, the Latina czar responsible for establishing relationships with a community that has been wary of Biden’s immigration stances. Cardenas left the Biden campaign in November over frustrations about the campaign’s trajectory and misalignment with Latino issues. “The campaign is just hyper-focused on whites in Iowa and African-Americans” one of Cardenas’ allies told Politico “and it placed less value on Latino outreach”.

While Biden was vice-president during the Obama presidency, 1.18 million deportations were facilitated. Inversely, Biden was also vice-president during the passing of Deferred Action for Childhood Arrivals (DACA) that afforded over 600,000 DREAMers (migrant progeny brought to the United States as children) the opportunity to remain in the United States and avoid deportation.

Only days after Cardenas’ resignation, immigration activist Carlos Rojas confronted Biden at a Greenwood, South Carolina town hall where the presidential candidate told Rojas he should vote for Donald Trump. “You have the power as a candidate to actually commit to stop all deportations” Rojas responded to the candidate “from day one through executive action and I want to hear you say that.” The activist and his companions proceeded to lead a chant of “not one more deportation” as they marched through the audience bearing signs reading their refrain.

After Cardenas’ abrupt resignation, and soundbites from the Nov. 22 town hall, the Biden campaign claims they are now focused on “making outreach to Latinos a priority”. The Biden campaign still employs two prominent Latinos in Cristóbal Alex, former Latino Victory Project president, and Biden campaign Outreach Director Laura Jiménez, but the candidate laments Cardenas’ departure. “I understand her frustration,” said Biden to the Associated Press “I wish her well. I’m sorry she was frustrated.”

The next Democratic presidential debate where Biden has secured a spot is expected to be all-white after California Senator Kamala Harris dropped out on Tuesday, December 3rd.