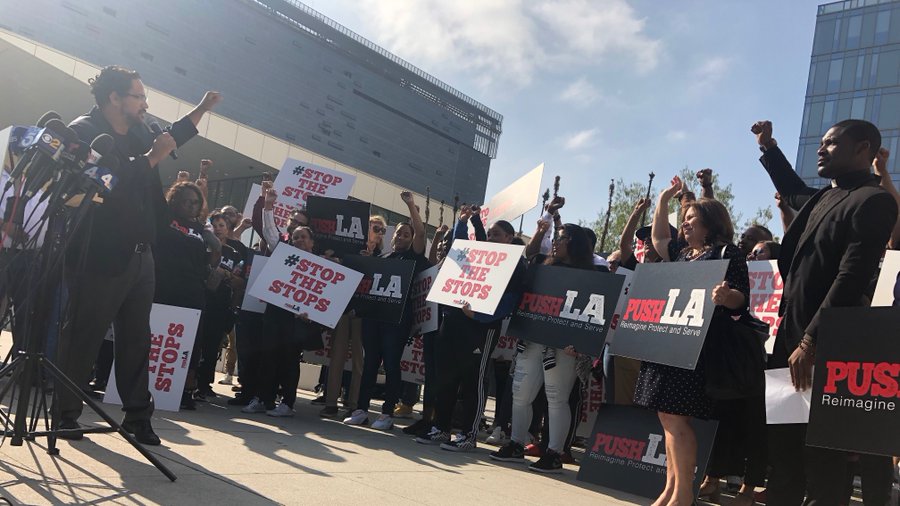 LAPD is racially profiling Latinxs and Blacks, and the people are fighting back

A new California law that requires officers in the state to record the race and gender of the people they stop and search led to findings of racial profiling at traffic stops by an LA Times investigation.

Leo Hernandez was stopped twice by Los Angeles Police Department officers in 2015. He didn’t want to think it was due to racial profiling, but he couldn’t help but question the police officers’ motives for stopping him repeatedly. He said the first time he was stopped, officers told him it was because he was driving a Honda Civic, a model that was routinely stolen in the area, but a recent study that says LAPD does profile people of color has many fighting back. The next time, Leo said officers told him that his car’s tinted windows were too dark and that the rosary beads he placed on his mirror illegally obstructed his view.

Officers asked to search his car both times, to which Leo said he agreed. The officers found nothing both times but gave him a ticket after the tinted windows incident. The 36-year-old Latinx, who works part time for the Los Angeles Recreation and Parks Department, started wondering if these repeated stops where due to the color of his skin. “I asked, ‘Why I am being stopped? Is it because of how I look?’” Leo told the Los Angeles Times. “Of course it felt like profiling.”

The study, which was released in October, was the first in a decade to calculate racial breakdowns of searches and other actions taken by LAPD officers after they pull over drivers. According to the LA Times, the analysis was done in response to growing nationwide scrutiny over racial disparities in policing. They used data obtained under The Racial and Identity Profiling Act, which requires officers in California to record the race of people who they’ve stopped and searched. LAPD had to submit this data on April of this year, but some smaller agencies across California have until April 2023 to turn in their racial data.

In an effort to address the issue, PUSH LA Coalition, which includes Black Lives Matter, the ACLU of Southern California and other local groups, is calling on officers to stop using minor violations such as broken tail lights as an excuse to search vehicles for more serious wrongdoing. The group also wants the LAPD to admit it engaged in racial profiling, to apologize to the people who were unlawfully stopped and searched and offer them monetary compensation, and to fire the officers who are doing the racial profiling.

The expectations were presented in a formal letter sent to Mayor Eric Garcetti and LAPD Chief Michel Moore recently. “We are here to call out the contradiction that white people can drive along in this city without any real fear of the police, while black and brown folks cannot,” Alberto Retana of Community Coalition told Moose Gazette.

A spokeswoman for Garcetti told Moose Gazette that the Mayor’s Office is reviewing the letter and “will press forward in the work of making certain that our police department earns the trust of Angelenos in every community, every day.”

This includes switching to marked patrol cars and forming a group to study stop-and-search data to better understand differences among races, neighborhoods and officers.