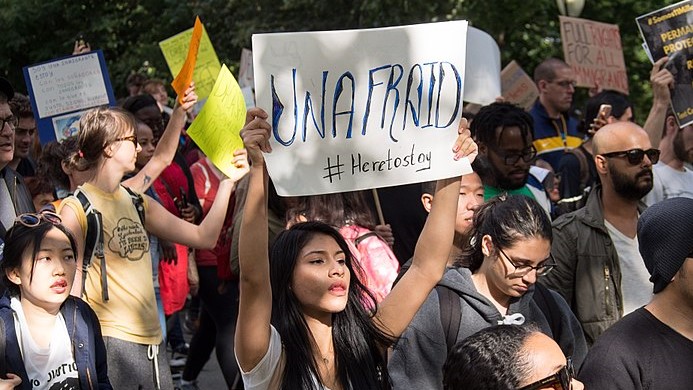 The fate of DACA heads to the Supreme Court

It’s been a tumultuous time for people living in the United States under Deferred Action for Childhood Arrivals. The program, known as DACA, put in place by the Obama administration in 2012 has been in danger of ending. And on Tuesday, November 12, the Supreme Court will hear arguments that challenge the Trump administration’s efforts to end the program.

DACA allows immigrants, referred to as “Dreamers,” whose parents brought them into the U.S. as children to stay in the country, and those accepted are then able to obtain proper identification, attend college and work legally. It’s intended to protect children who had no say in migrating to the U.S. from being deported, and provides them with opportunities in what is often the only country they’ve known.

In the case of Harvard Law student Mitchell Santos Toledo, whose parents brought him to this country at the age of 2, he only remembers living and going to school in the U.S. Mitchell always had high academic ambitions, and because of DACA was able to enroll in college and eventually at Harvard Law School. Mitchell told NPR that when he got his Social Security card in the mail, he cried because of the opportunities that allotted him.

In 2016, Trump campaigned on the platform of ending DACA, and the program has been in danger since he came into office. In September 2017, then Attorney General Jeff Sessions announced that DACA would end. But lower-level courts have blocked these efforts, and after two years, DACA’s fate is now in the hands of the Supreme Court.

These Nov. 12 hearings affect about 700,000 people living and working all over the U.S., including one of the lawyers who will be arguing in favor of DACA, Luis Cortes.

Luis told The New Yorker he was initially afraid to apply for DACA while in law school, but that once he did, his new status helped him get a job at a law firm upon graduating.

Although DACA isn’t technically a step toward citizenship, the contributions of DACA recipients haven’t gone unnoticed. More than 4 in 5 Americans support granting U.S. citizenship to DACA recipients, according to a Gallup survey taken last year. Some of the nation’s largest and best known business, including Starbucks, Amazon, Netflix and Spotify urged the Supreme Court to protect the program, reported CNBC.

The Trump administration argues that DACA is unlawful because Barack Obama abused his authority when he created the program through executive action. Obama created DACA after Congress refused to pass the Dream Act, which would have given the “Dreamers” legal status and an eventual path to citizenship, reports the New York Times.

There are a few potential outcomes at the Supreme Court, reports The New Yorker. The Justices could rule directly on the lawfulness of the Administration’s cancellation of DACA, or they could instruct the government on how to cancel DACA lawfully, and they could say whether the program is lawful in the first place.

Attorney Luis Cortes said a  spring decision from the Supreme Court is expected, and encourages those who qualify for DACA to not be discouraged by the hearings and to apply for the program.