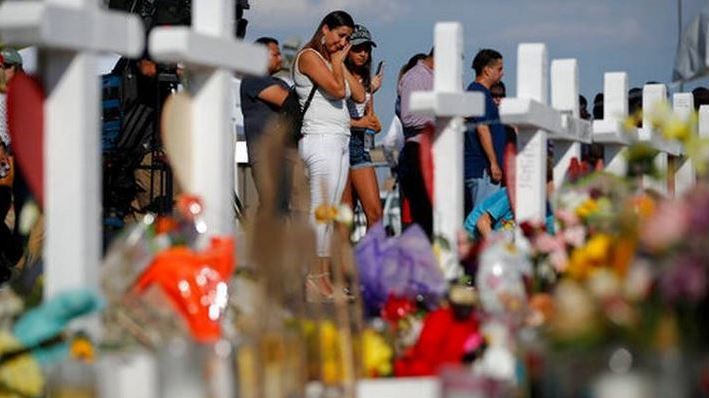 Twenty-two people whose lives were cut short by a mass shooter at an El Paso Walmart shopping center on Aug. 3 are being memorialized at the very location where the tragedy occurred. At least two dozen other people were injured, with most of the victims of Latinx heritage and hailing either from El Paso or Mexico sister city of Juarez.

Law enforcement suspects racism was the reason for the attack on the part of a white man from the Dallas area who wreaked havoc on the border community that fateful morning, according to multiple media reports. As the city grapples with a new normal, with so many loved ones perished and a sense of safety forever shattered, the local Walmart store is helping bring peace to the community by visualizing the permanent memorial.

The East Central El Paso Walmart closed its doors after the violence of the Aug. 3 tragedy, but after serious deliberation, its leaders decided to reopen the store on Nov. 14. Walmart’s regional general manager and vice president, Todd Peterson, announced the delayed reopening, emphasizing it would not be a celebratory event, but that there would be an unveiling of renovation and external work completed on the store, according to the El Paso Times.

The memorial will be called “The Grand Candela” and will emit a beam of light at the south side of the property. It will be surrounded by a decorative metal fencing to commemorate the tragedy, according to the El Paso Times. The memorial will emulate candles which will be built out of 22 perforated aluminum arcs grouped together into a single 30-foot candela.

It “will stand as a tribute to each of the lives lost” and [as] “a testament to the light of hope that radiates from the El Paso community,” Peterson said in a news release cited in the El Paso Times. He expressed gratitude during an Oct. 29 El Paso City Council meeting that Walmart is part of such as “incredible community,” that responded to tragedy with “unity, compassion and love,” he said.

It was the employees, the victims and the community at large, who inspired Walmart officials to reopen the store and memorialize the victims with a dedication, Peterson said.

Peterson said Walmart’s employees didn’t want to be defined by the incident, and instead, preferred to return to work as soon as possible. Within three weeks of the tragic event, 93% of employees returned to work, Peterson said. They opted to head back to work despite having the discretion to take time off from work to heal and spend time with their families.

Walmart officials told El Paso Times reporters that work on the 30-foot structure will take four to six weeks to complete. Construction on the foundation for the memorial has started and will serve as the anchor of a plaza on the south side of the store’s parking lot, according to the El Paso Times. It will be enclosed by metal fencing and incorporate native and adaptive plant landscaping.

The Walmart store was originally slated to re-open on Nov. 6., according to the El Paso Times. In addition to directing the creation of the memorial, Walmart officials also announced the store is pledging to match up to $1.5 million in donations through the Paso del Norte Community Foundation’s El Paso Giving initiatives.

The memorial is expected to be completed by early December, Delia Garcia, Walmart senior director of communications, told News 4 Jax.