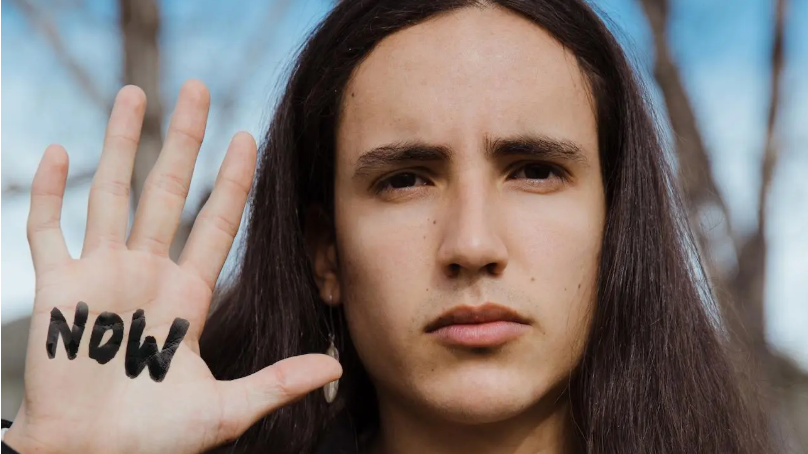 Xiuhtezcatl Martinez is a teen climate crisis warrior on a mission

Long before Swedish 16-year-old Greta Thunberg inspired millions of youth across the globe to come out on strike from school to demand climate change action, Xiuhtezcatl Martinez was doing his part to fight climate change in the Americas. Xiuhtezcatl, who is of indigenous Mexican descent, believes it’s his spiritual duty to protect the Earth and has fiercely worked to stop climate change from the tender age of six. He joined Greta and other young activists in Washington, D.C., for demonstrations recently.

“I think this represents a moment in history where the climate crisis is more present than it has ever been, both in many political spheres and in the global conversation,” Xiuhtezcatl told PBS “The consciousness of the people, and I think the younger generation, is very reflective of this dire sense of urgency.”

He believes the first global climate strike, on March 15, raised the stakes as 1.6 million people walked out of school to demand serious climate action and call on politicians to do their part. The fact that New York public schools offered students excused absences on the day of the latest strike is evidence that climate action is “the most important issue of our time,” he said.

“It’s not like we’re pretending like we know everything, because we are telling politicians to listen to the scientists that have been telling us for decades that this is something that we need to be paying attention to immediately and acting upon immediately,” he said. “ And I’ve been doing this since I was six years old, so I’ve been in the game for like 12 years,” Xiuhtezcatl noted.

The 19-year-old activist and music artist serves as youth director of Earth Guardian, an environmental justice organization. He is launching NOW, a new platform that aims to empower people of all ages to support removing carbon dioxide from the atmosphere using culture, music and technology through a subscription model. Described as the Netflix of fighting climate change, NOW is housed on www.generation-now.com and on the EarthTracks app, known as a “fitness tracker for the planet,” which helps track their environmental footprint.

“Every layer of advocacy and activism and action that I’ve had the opportunity to engage in, from the lawsuit pursuing the federal government in the state of Colorado, to community action, education, traveling, speaking, writing books — it’s just gotten to a point where waiting for political action to happen is just not something we can afford,” Xiuhtezcatl told Green Matters.

“Yes, we need politicians to act. Yes, we need to flip the Senate and elect a president who will take vigorous action on climate change. Yes, we need the United Nations and the governments of the world to step up to the game to decarbonize our global economies,” he added. “But that’s not anything that we really have time to sit idly by and wait for. There is so much grassroots momentum from people right now, especially the people leading this climate fight.”