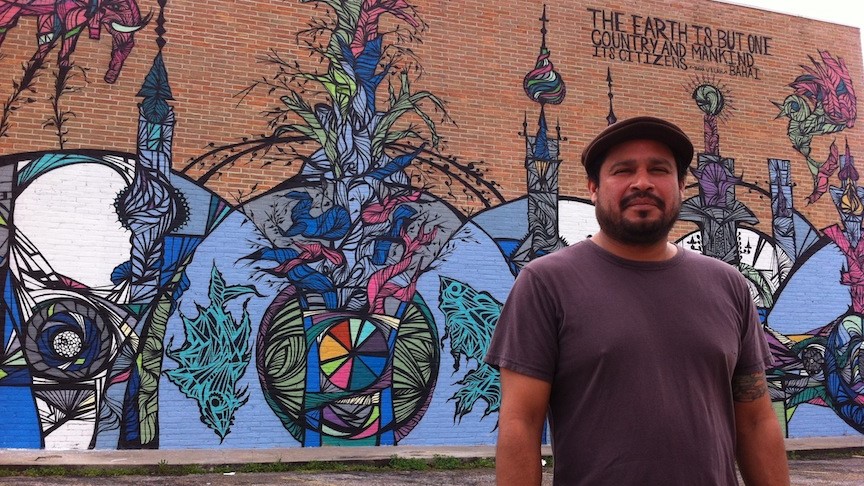 When Daniel Anguli arrived in Houston from Mexico, he barely spoke English. But he used his gift for graffiti art to express himself, and since then he’s painted over 100 murals across the Texas city. His art, along with that of many other Latinx graffiti artists , has gone from something that is created in the shadows of the night to colorful celebrations emblazoned across central city streets across the country.

Daniel began painting graffiti at an early age, and he quickly built a reputation for using freight trains and walls as his canvases. Working as a train driver gave him the opportunity to enjoy many of his projects during his work hours. His eye-catching work in Houston led him to build an international portfolio, and now his work is displayed in exhibits throughout the United States,  Mexico, and as far as Peru, Spain and Italy.

Now that he has found success in his art, he dedicates part of his travels to explore the world and learn about pre-colonial art and culture. There is great value in each of his travels, which Daniel says then informs his new work.

When asked about the source of his passion, Daniel says his work is profoundly inspired by his Mexican heritage. He has often publicly expressed his gratitude for the Houston community that has supported him and his creations art in public spaces.

However, Houston isn’t the only U.S. city that welcomes Latinx graffiti artists like Daniel with open arms. Los Angeles embraced Latino muralist and graffiti artist Man One. Like Daniel, Man One celebrates his Mexican heritage through art. He loves connecting with the community and interacting with  people around his murals.

And although there aren’t as many female graffiti artists, there is no doubt some are leaving their mark. A notable early riser is Lady Pink, a Latina who found mainstream success making graffiti art on the subway cars and walls of 1980s New York. She was part of the first wave of artists that started tagging cars and subway cars. At the time Lady Pink was still in high school, and immediately received media attention because of her distinctive artistic style coupled with her unique name. Her She’s a trailblazer in an industry that is still male-dominated, collaborates other artist and sometimes has her work included in graffiti exhibitions.

When these talented Latinx artists are emboldened to create masterpieces, our community wins!