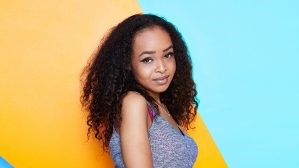 This new identity empowers Pollyanna to be her best self

Pollyanna Rodrigues De La Rosa didn’t realize she was Afro-Latina when she was growing up. That’s because growing up, her family considered themselves simply ‘Latinos’.

Her family didn’t talk about their Black heritage because doing so brought painful memories of discrimination and hate. That trauma manifested to the point that Pollyanna’s mother questioned why her daughter preferred to date Black men over white men. When she visited Cuba, some of her cuban family members advised Pollyanna to straighten her long curly hair for a “better” look.

Her family’s Latinx identity, combined with the anti-Black rhetoric she internalized, made her feel incomplete and out of place. That is, until she came across the term “Afro-Latina” on social media and found a way to describe her full identity. Nearly 1 in 4 Latinxs in the U.S. self-identify as Afro-Latinxs.

There is a history of discrimination against Blacks within the Latinx community, but it’s important to remember that self-acceptance and self-love begin at home. That’s why global campaigns such as #unfairandlovely are critical to young, impressionable children who adopt the feelings and beliefs of their elders. The 2016 social media campaign took off after starting as a Black college student’s project to combat colorism and underrepresentation of people of color in the media.

Having more positive role models in mainstream media is also important. Positive self-acceptance campaigns and open conversations on social media for young girls wrestling with self-identity, can make a huge impact, like it did for Pollyanna.